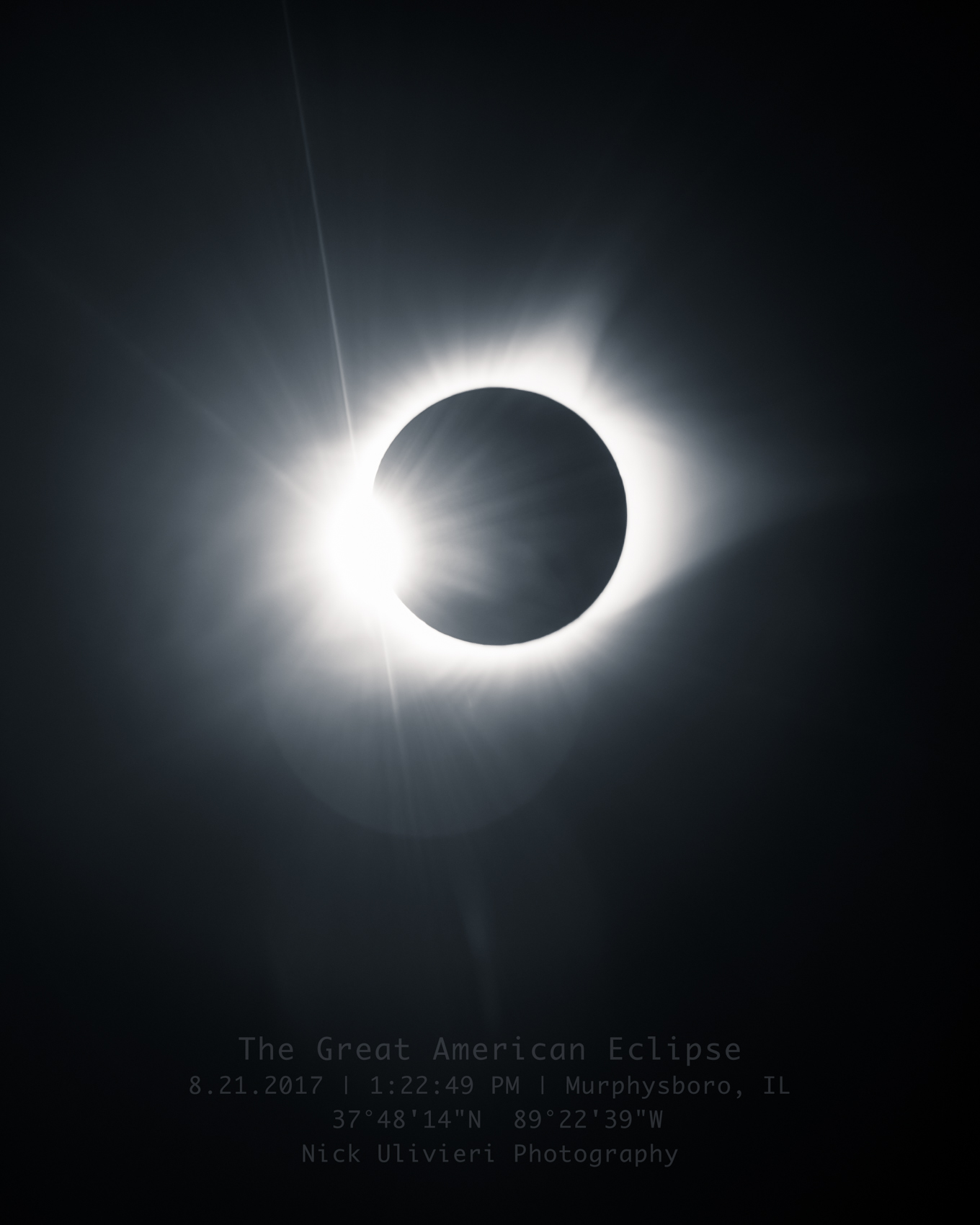 Amy and I hadn’t really planned to view the total eclipse, but as August 21 crept closer, the FOMO (fear of missing out) grew exponentially. As a self-professed ‘space geek’, it felt like a scientific sin not to drive 5.5* hours to experience Mother Nature’s greatest spectacle.

With the telephoto gear I rented for the Air show still in hand, and friends with a home in the path of totality, our road trip was all but certain. Whether the weather would cooperate was another story.

In the days leading up to the eclipse, Twitter was a hotbed of cloud coverage predictions. Some promising, others dismal. But there was only one way to find out what the sky would be at the moment of totality; you go. So we did. We left Chicago at 4:00am on Monday headed for Murphysboro, Illinois. By the time the sun rose, blue skies were tough to come by. The high cirrus clouds streaming off storms to the West were invading central Illinois. So the big question became when, and if, the skies would clear.

About an hour and a half outside of Murphysboro we had our answer. The skies were crystal clear. We arrived at our friends’ house at 11:11 exactly – about 30 minutes before first contact – and it was oppressively hot and humid. It felt like the perfect cloud forming conditions. Needless to say, I was worried we’d get clouded over. Nevertheless, Amy and I quickly made new friends and set-up our gear.

I shot with the Nikkor 200-400 telephoto lens & 1.7x teleconverter with a homemade solar filter. Homemade because we committed to the ‘chase’ so late, and proper solar filters were either rented or sold out. Instead, I MacGyver’d a filter from an old pair of eclipse glasses in order to get pre-totality shots. But it was totality, and the corona streaming off the sun, that I was after. Amy was getting some wide shots of the sky & landscape with the Nikkor 14-24mm.

The eclipse began, with some fanfare, but for the first hour or so, everything seemed normal, but It wasn’t until the sun was about 75% covered that noticeable changes befell the landscape. The oppressive heat subsided, and the terrain took on an alien appearance. It was almost dreamlike. Try as I might, I just cannot describe the odd quality of light to do it justice. You’ll just have to experience it to understand it. The colors were wrong, and the shadows were unlike any shadows I’ve ever seen. Seemingly sharper than normal – as if a spotlight, rather than a floodlight, was sing down on us. They were subtle at first, but strange enough to be downright bizarre near totality.

And then it happened. An innocent cumulus cloud approached the sun. Clouds were building to the South and East, but all afternoon we were in the clear. There were only a few minutes before totality. I panicked. I threw my tripod and camera over my shoulder and sprinted to the West in hopes of changing my angle enough that the sun would be unobstructed. I don’t know that I’ve run that fast before, and not certain I’ll ran that fast again. As I was running, desperately hoping my tripod head clamp wouldn’t decouple from the massive lens, I could see the distinct line of light where the cloud’s shadow ended and the sun shined. A few feet later I was in the clear. Much to my chagrin, I would have been fine if I stayed put. The cloud moved out of the way before totality.

There was no time to run back. My chest thumped, body trembled, and totality was seconds away. I fumbled with my camera and tripod, tore off my lens’ solar filter and anxiously waited. Then it happened. At nearly 1500 miles per hour, the moon’s shadow washed over the landscape and we plunged into a faux twilight. In some ways, the light of totality was slightly more familiar than the light before totality. It was dark overhead and brighter towards the horizon much like a sunrise or sunset. Except the sunset was happening at the horizon in every direction I looked. And of course, there was a halo of light ringing a black disc high in the sky.

I can’t stress enough just how spectacular this moment was. The difference between a partial eclipse – 99.5% even – and totality is almost literally night and day. Check out what Amy made for proof. If you’re within a day’s drive of totality, do everything you can to get within its path. You won’t regret it. The instant darkness was wild, but seeing the sun’s corona, a cloud of plasma glowing white-hot at more than one million degrees, was the highlight. Those wispy filaments shooting out from the sun, forever hidden by its intense light, were finally visible to the naked eye. It was the sun’s atmosphere. What has always been “just” an impressively bright disc in the sky now felt alive.

Then, the first rays of light appeared through the valleys of the moon’s surface. Two and a half very short minutes later, the total eclipse was over. Once again, I threw my tripod over my shoulder and walked back to the house, my head held high. I was in utter disbelief and had the strangest feeling of accomplishment. I don’t have a bucket list, but in that moment I was retroactively adding an eclipse to one, then crossing it off. Despite all the odds, I managed to see the quintessential celestial alignment – and it was more glorious than imagined.

Sidenote: Solar eclipses happen about once every two years so they aren’t necessarily rare. But the fact that it happens somewhat regularly is a rarity in and of itself. The sun is 400x farther from us than the Moon, but its also 400x larger than the moon. This means their apparent size in the sky is nearly identical. If the moon was much bigger or closer, it could block out much of the sun’s corona. If the sun was much bigger or closer, the moon would never completely cover the sun.

I’m no expert, but I doubt this is a common occurrence in planetary systems outside of our solar system. Not only were we in the right place on Earth, with a clear sky, during the right orbital alignment, we also have a coincidentally perfect mix of orbital distances to create this astronomical spectacle. Mind = still blown.

When I got back to the group we had a celebratory beer, reviewed my photos, and scarfed a plate of delicious arroz con pollo. Sweat drenched my favorite NASA shirt, but it didn’t matter. We succeeded in our mission. A few moments later we said our goodbyes and headed back to Chicago even before fourth contact. Amy had an early flight the next morning, and we knew traffic would be heavy. We just didn’t know how heavy. I used the asterisk in the beginning of this post for a reason. What should have taken 5.5 hours turned into an 8 hour 50 minute slog home. But I’d do it again in a heartbeat. Not only did we see the “The Great American Eclipse” we also survived “The Great American Traffic JamTM “.

More of my eclipse shots are posted here, but none of them make me feel the way this one does. I can say with absolute certainty the chase is on for the next American total eclipse in 2024.