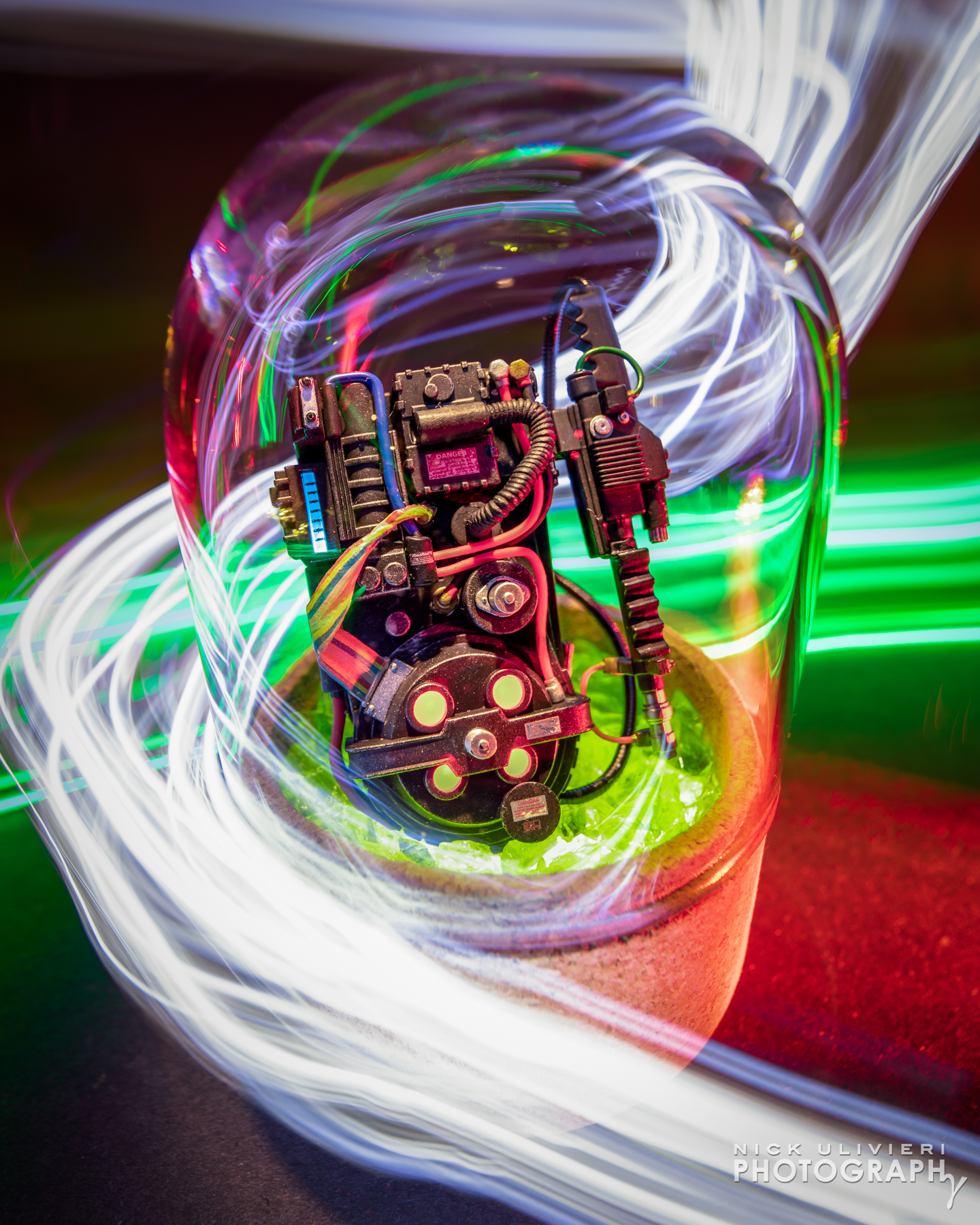 I haven’t done a just-for-fun, non-architecture photography project in quite a while. But that streak ended recently. I should back-up and say that I was (am?) a huge Ghostbusters fan. Here’s a good story. I split my head open while running to tell my mom about the Ghostbusters Firehouse playset. After turning the corner to go up the stairs, I tripped and smashed head-first into the corner of the stairway’s banister. It was a bloody mess. I still have the scar on my forehead. It’s also plainly visible in my pre-school aged portrait. I probably watched both movies – and the cartoons – hundreds of times. No joke. So with that out of the way, let’s fast-forward to the present.

Sometime last fall, while walking through IKEA, I came across this set of small glass & cork curio domes. Even though I had nothing to put in them, I had to have them…for some reason. Not surprisingly, it sat empty for a long while. I couldn’t find the perfect ‘thing’. 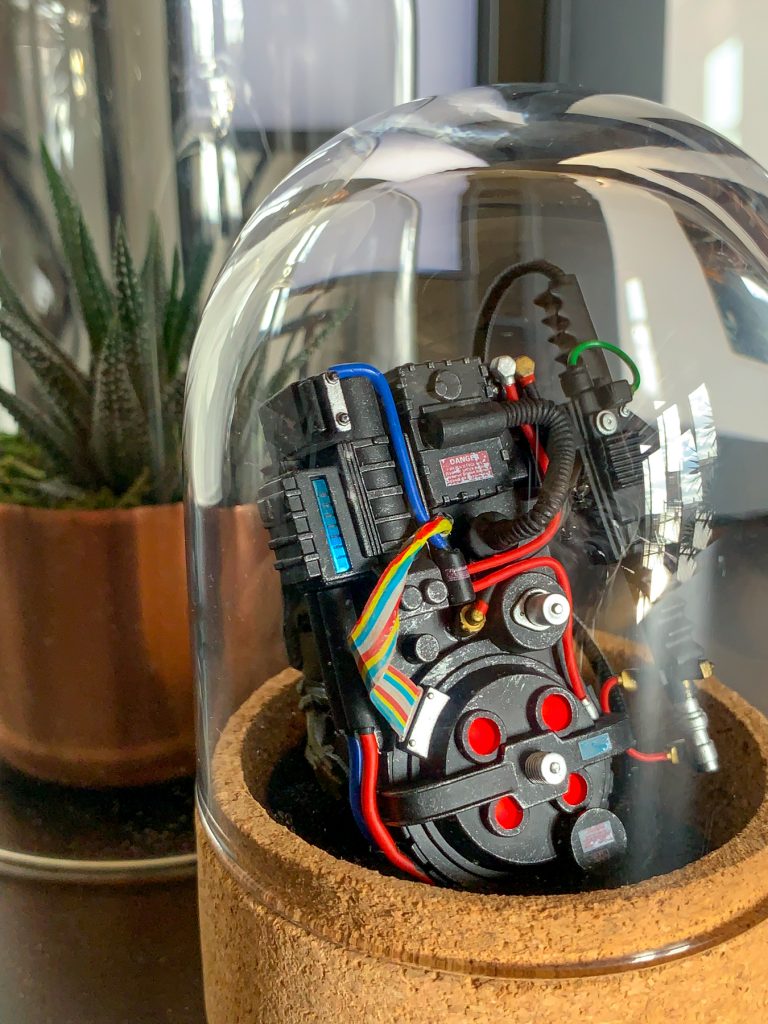 With feelings of Ghostbusters nostalgia roaring back ahead of the third movie’s release this summer, I fell down a Google-hole of old Ghostbusters toys. But then I came across newer, highly detailed figures. Further still, I came across a 1/12 scale, light-up proton pack from BlackOpsToys.com. OMG. Like the mature, calm adult I now am, I didn’t split my head open running to tell Amy about what I found.  But I did order it immediately, and obsessively tracked the package for the next few days.

So when I received the proton pack, I lodged some black foam in the bottom, propped it up, and sealed it up (left). There it sat, proudly, for about a whole day, before I got the urge to customize it further, and do a proper photoshoot. The plan was simple: add a slime green, light-up base. So I hopped on Amazon, and ordered my supplies: A canister of crushed green glass firepit/aquarium glass; and a few strings of watch battery powered (this was key) mini LED ‘fairly lights’ in various color temperature options (cool white, soft white, and green).

Once the supplies arrived I got to work. The mod was pretty simple. I wanted the terrarium to be self-contained and free of cords, so I chiseled out the bottom of the cork base (1) to friction-fit the LED battery pack (2). After that, I cut a narrow channel (3) on the back to get the lights into the base. I coiled and flattened the lights (3), then filled the base with the crushed green glass (4). The final shot is the glass lit from below. A quick note: I ended up using the soft white lights, not the green ones. The green color of the lights & green glass was too…green. Using the warmer, soft white lights under the blue-green glass gave me the perfect “ECTO Cooler” look I was going for. 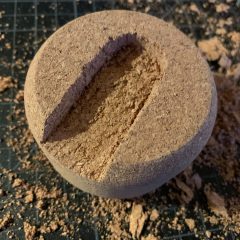 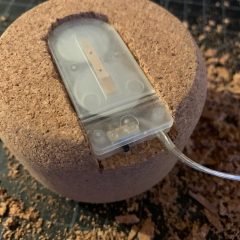 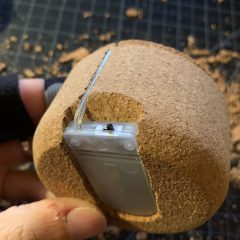 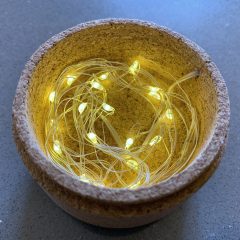 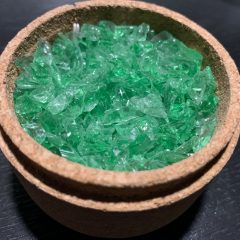 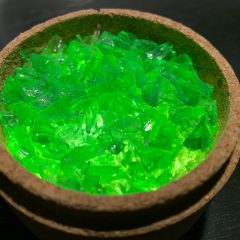 Once the base was lit, I nestled the proton pack in the glass, closed the dome, and got to work on some proper photos. And with all the strings of LED  lights I had at my disposal, it turned into a really dynamic shoot. 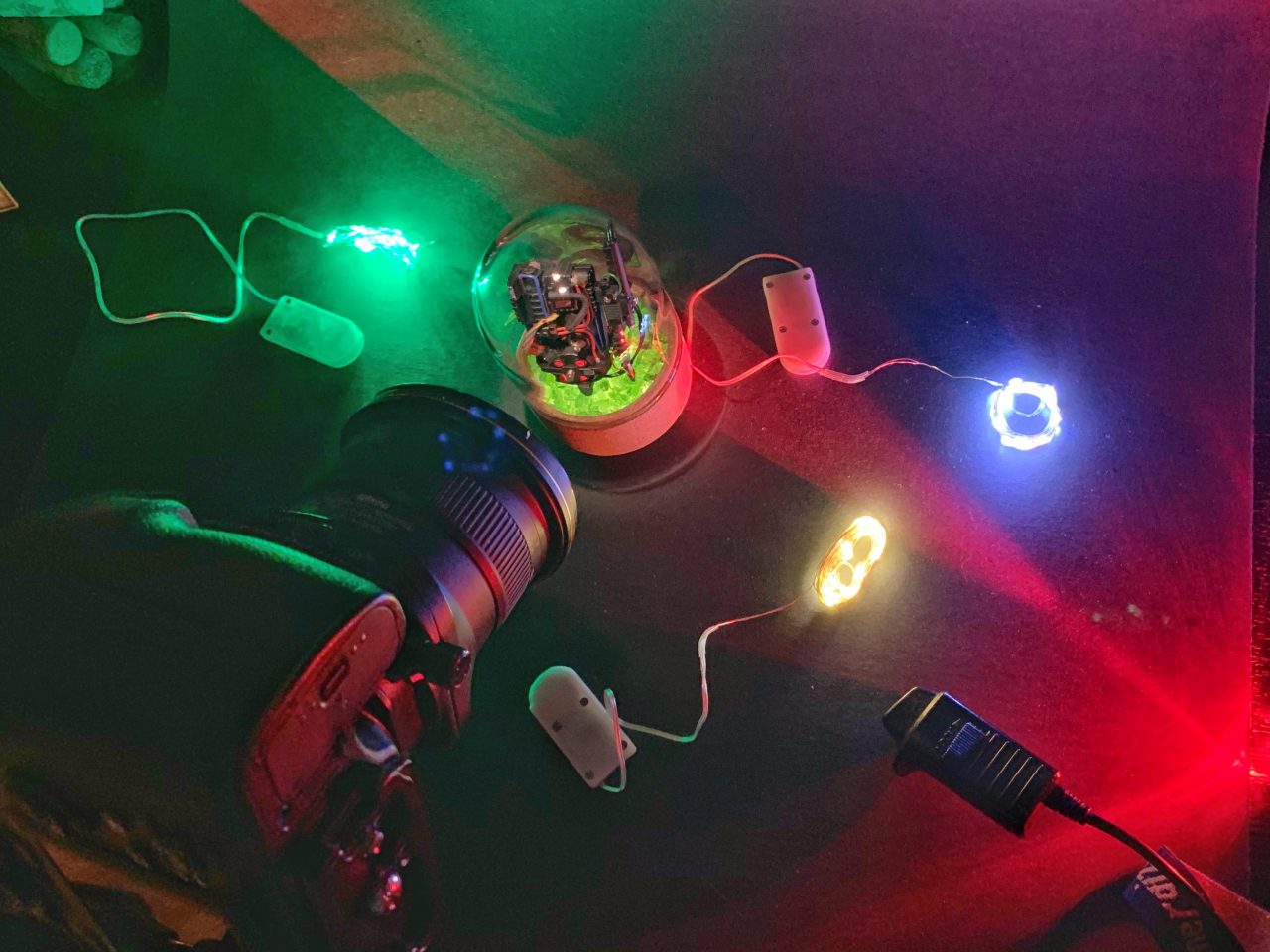 My ‘studio’ was quite simple. My background was a piece of black construction paper propped-up on a shelf with a single LED under-cabinet light overhead. I covered the light with a black paper cone to focus the light’s beam onto proton pack. In effect I created a spotlight.

The other lights I used would mostly add mood and texture. Sadly, I didn’t mess around with many different angles because I was so preoccupied with the different light schemes. I used my 24-70 for a few shots, but ended up switching to my 19mm tilt-shift. It’s macro-lens-like focusing ability allowed me to push really close to the subject.

I shot a few ‘clean’ frames – without any colored LEDs before moving to some more creative looks. The red light came from a headlamp just off of to the side of the camera. The light painting technique was actually a happy accident. In some early frames, I held the LED light packs above the dome to further light the proton pack, but I quickly realized I could light paint with them. Those first frames immediately reminded me of the scene after the containment unit explodes and spirits are flying through New York. From there I experimented with different colors, movements, and blends to get the final images. Here are a few of my favorites. Click into them for more detailed captions: 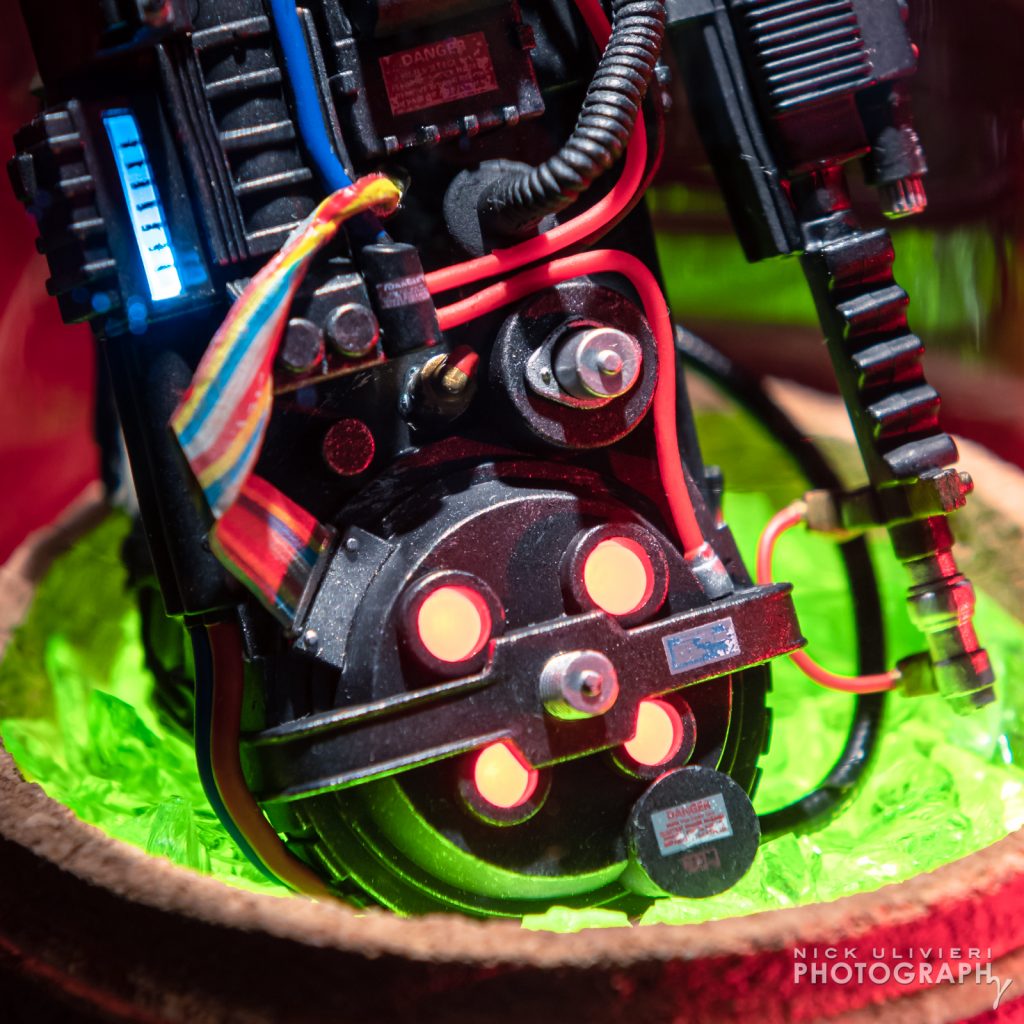 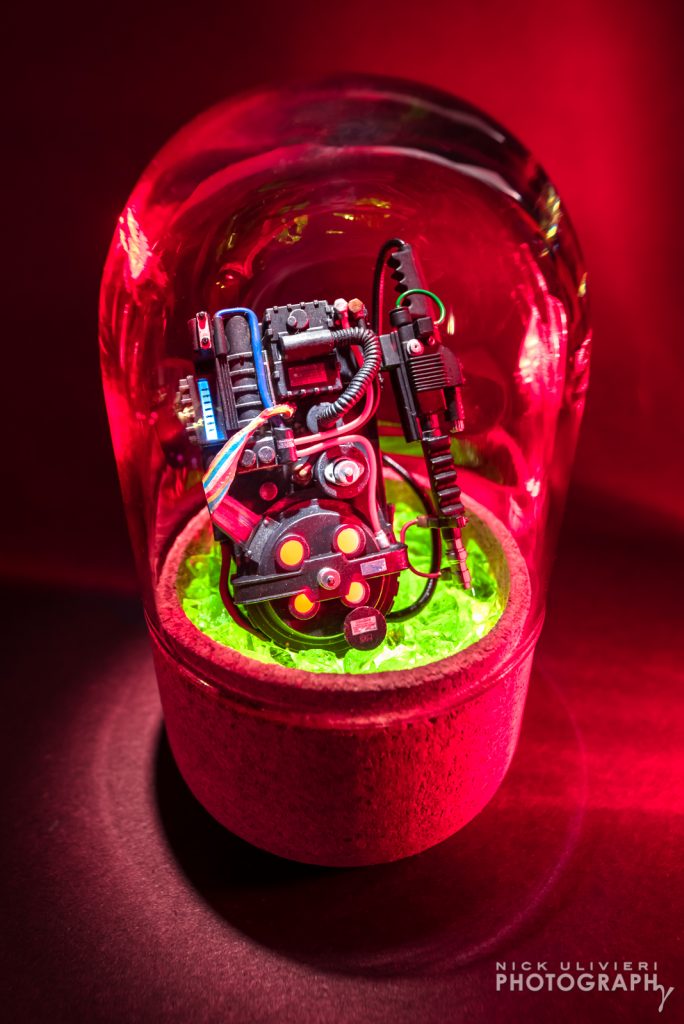 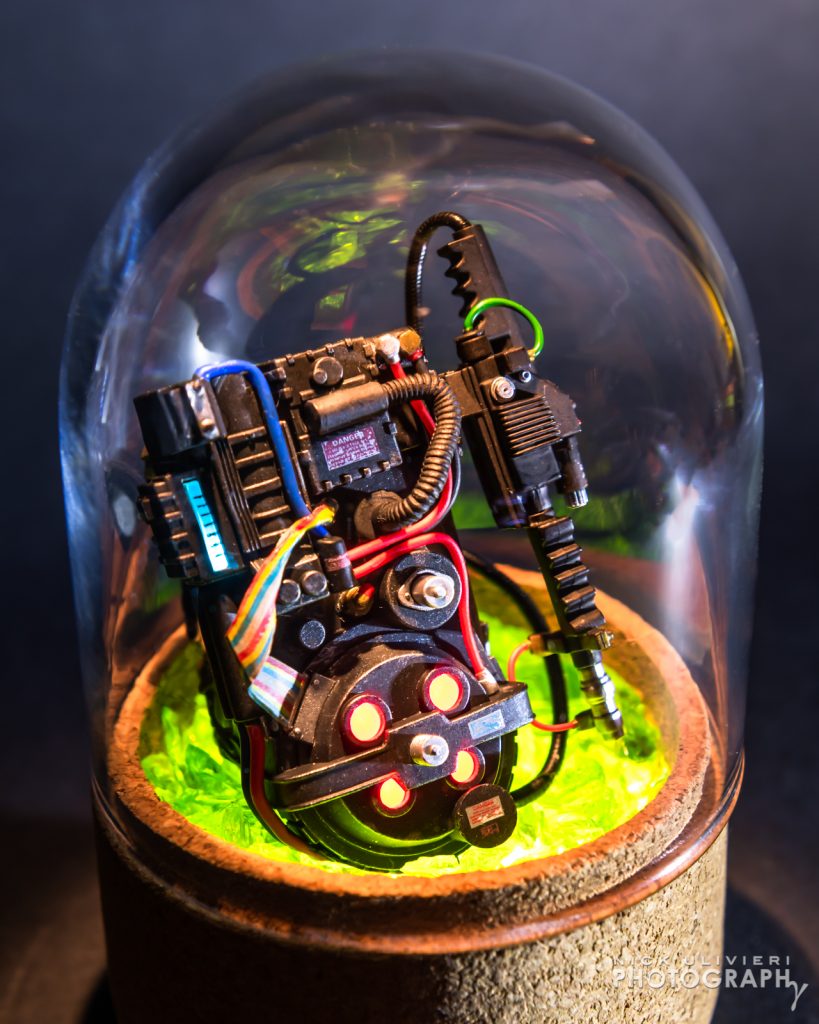 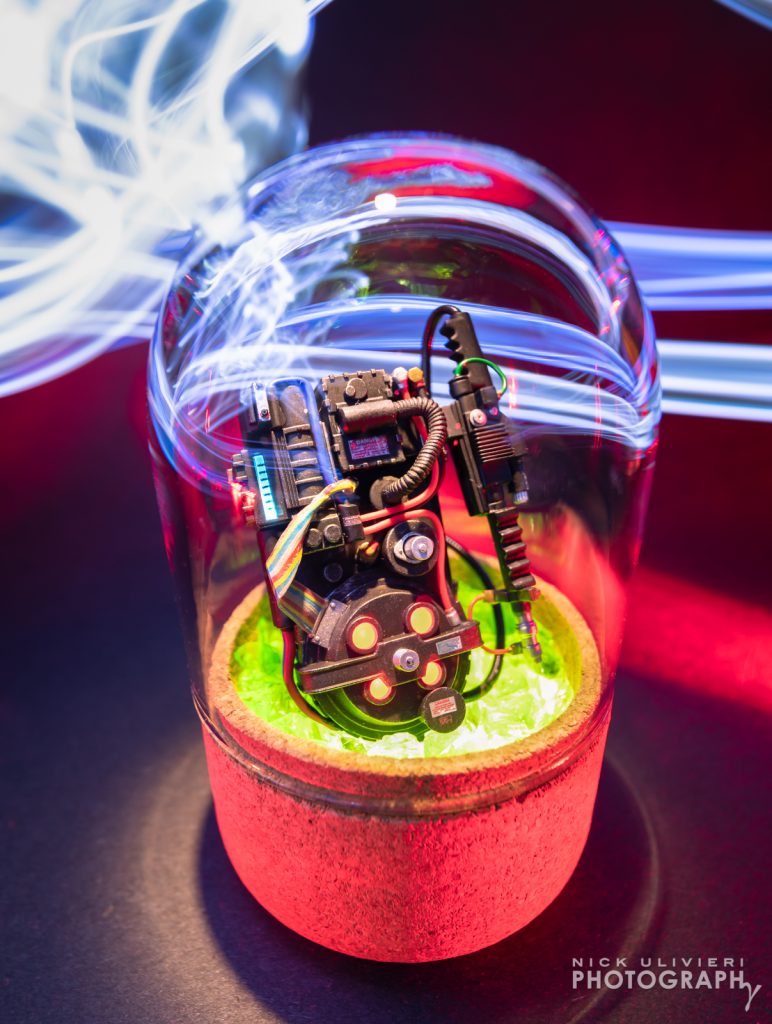 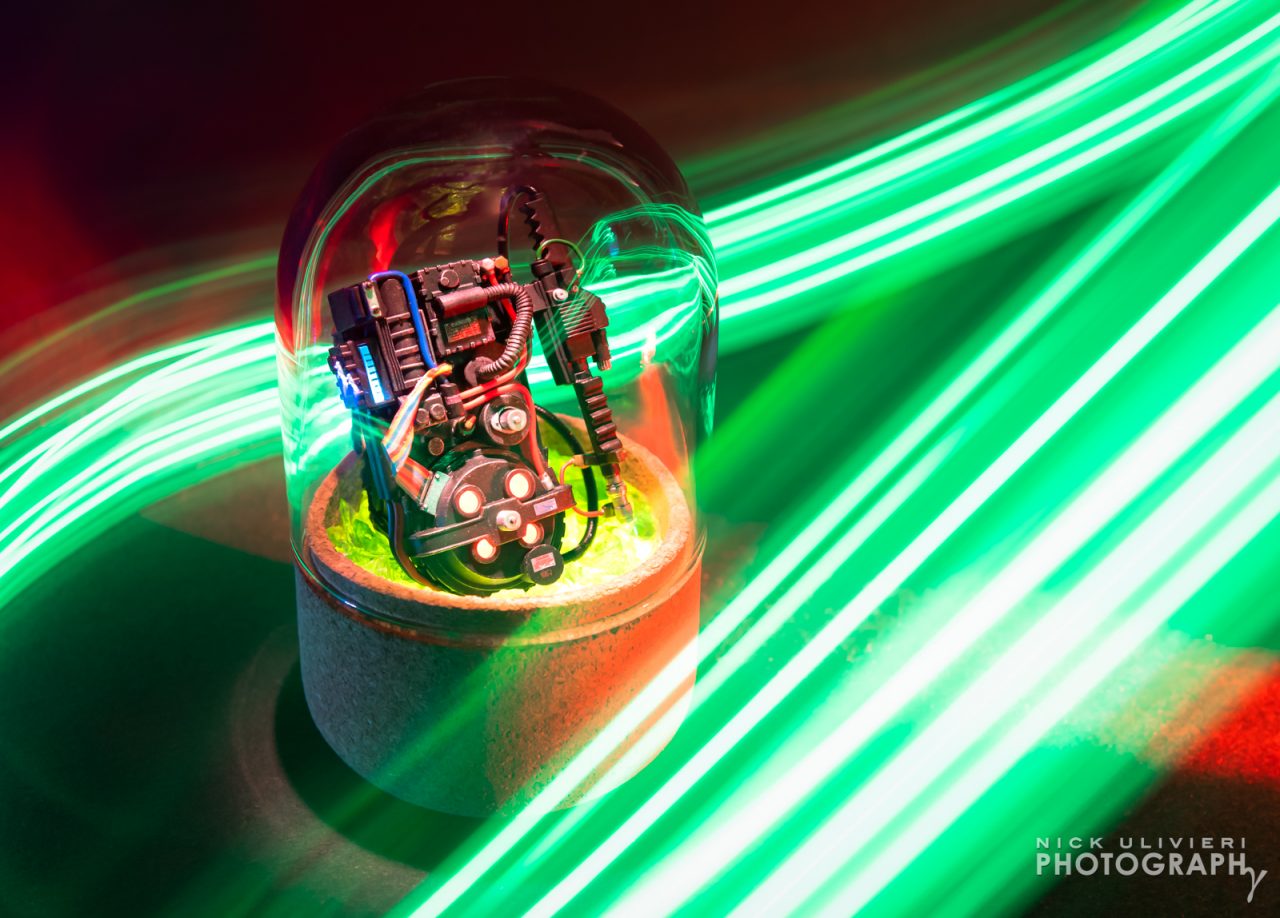 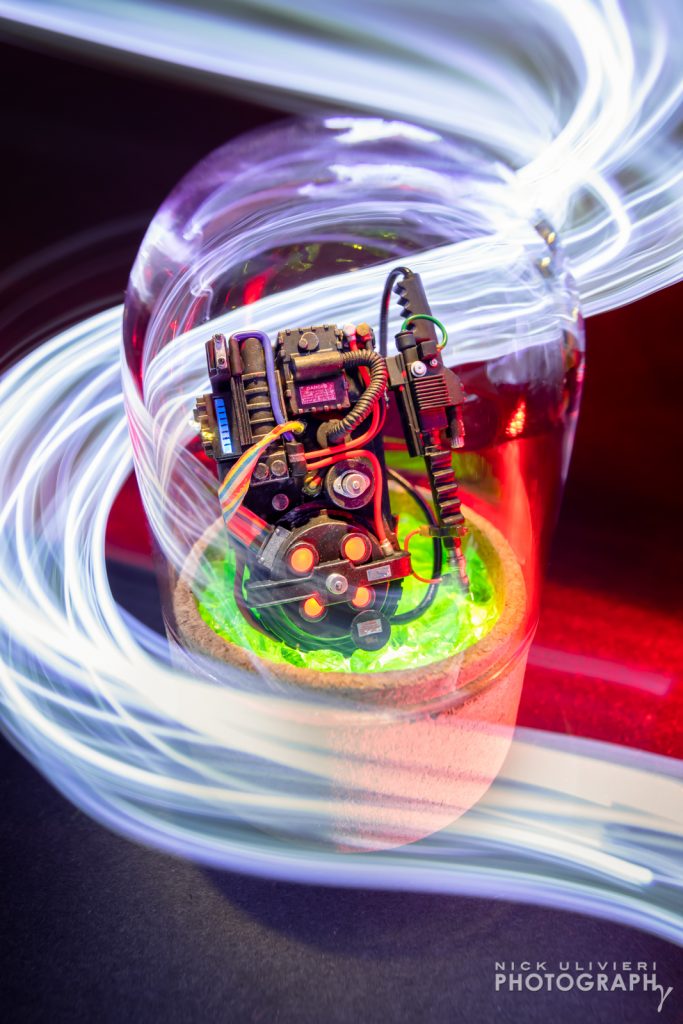 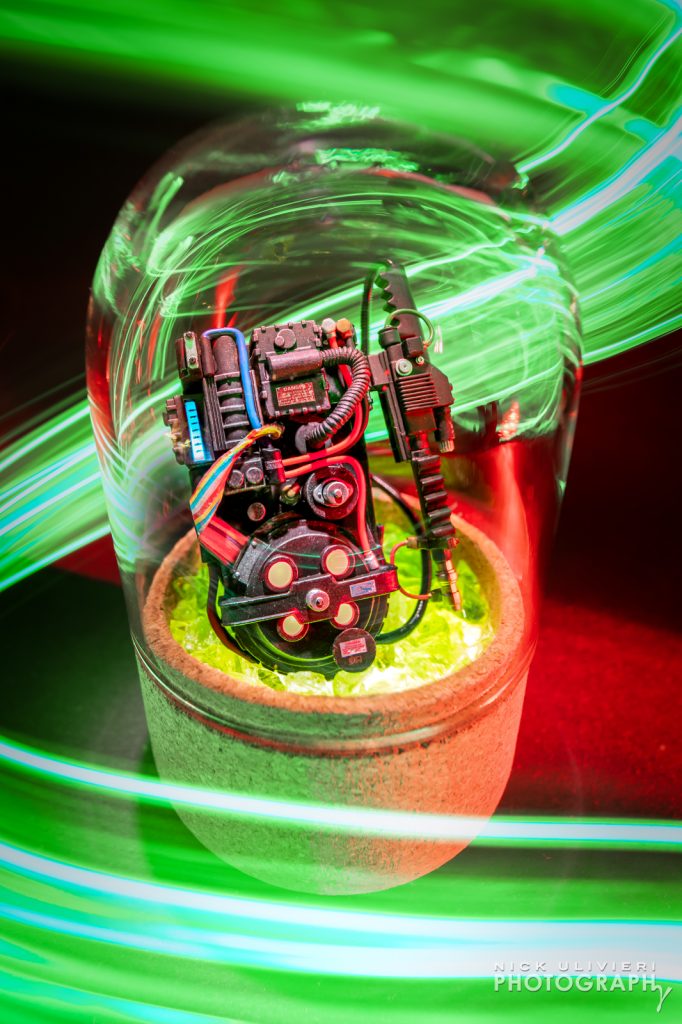 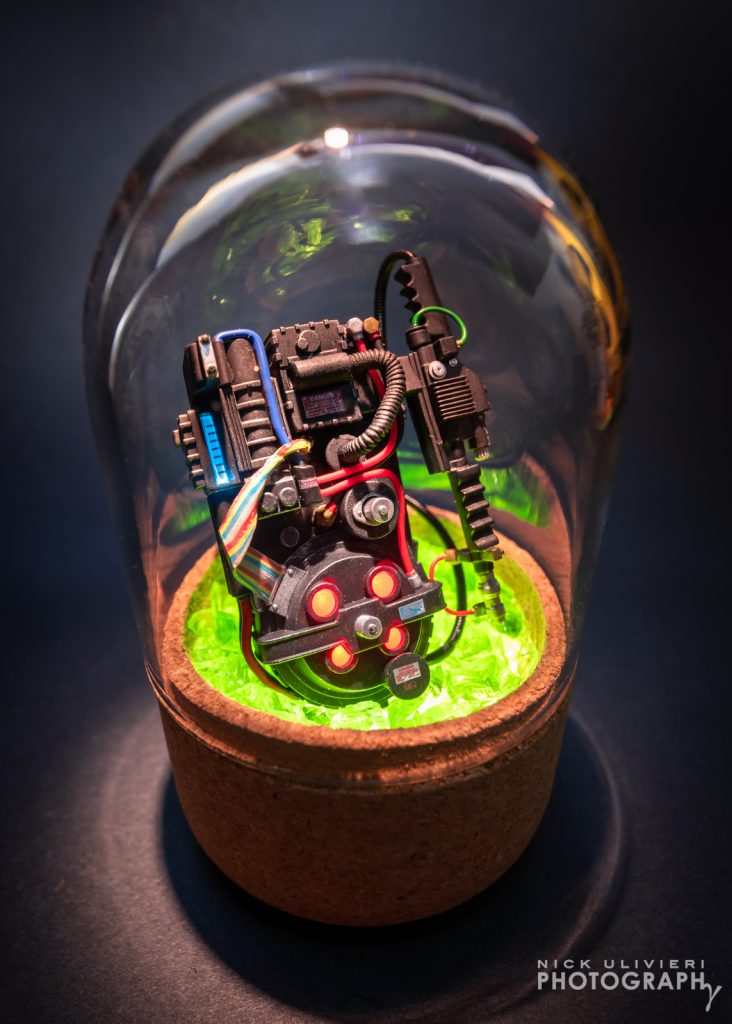 I hope you enjoy! If you want to see a few more, the rest of my images are here.