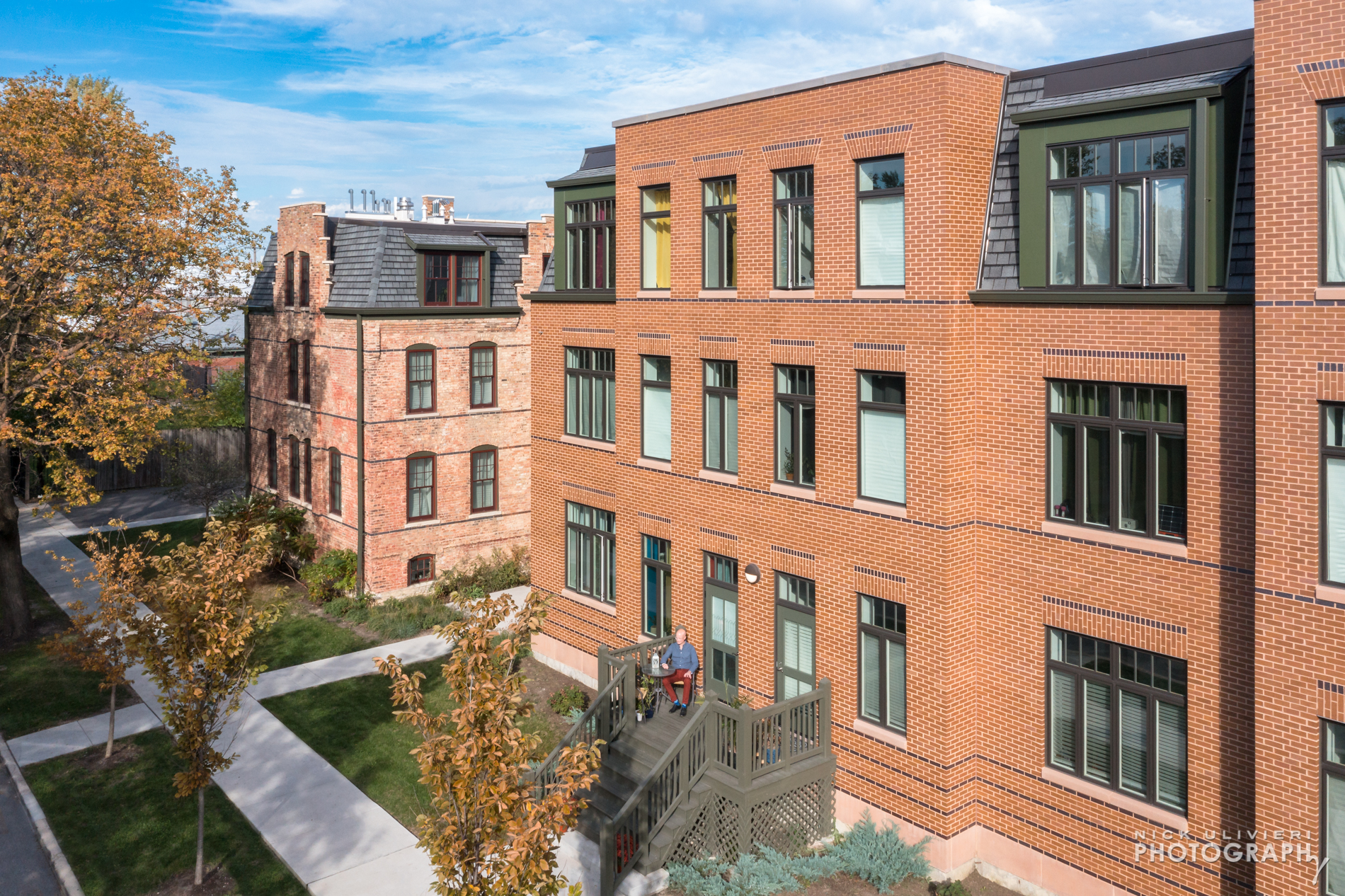 Early this fall, I teamed up with Stantec to photograph their recent restoration AND new construction projects in the Pullman Historic District. Their charge was to renovate and restore two historic buildings while constructing a new one between them. This trio of buildings at 11143 S Langley Avenue is now the Pullman Artspace Lofts –  affordable live-work spaces for artists. With this project, Stantec delivered 38 new homes for a variety of artisans. The ground floor of the new building features a public art gallery and studios for residents, too!

If you’re not familiar with the backstory of Pullman, I included a history lesson at the end of the blog post. While Pullman was unique and consequential to American history for a variety of reasons, for the purposes of this post it’s important to keep Pullman’s architecture in mind. The architecturally significant row houses designed by architect Solon Spencer Beman were quite comfortable for the standards of that time. And the Victorian-styled buildings, urban plan, and landscape sparked awe in tourists visiting Pullman during the World’s Fair of 1893. In essence, it was a place unlike any other in Chicago at the time.

After Pullman became a National Park in 2005, the neighborhood was poised for a comeback. Federal and private dollars began to flow into the area. After a lengthy proposal and design process between twenty firms, Stantec eventually won the bid to rehabilitate and design this two-pronged project. The plot of land Stantec inherited featured two decaying worker’s apartment buildings from the early 1880s at each end of the lot. An open space where a long row house once existed lay between them.

Check out a couple before photos, courtesy of Bill Ketcham from Stantec: 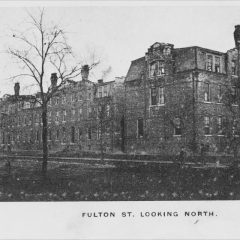 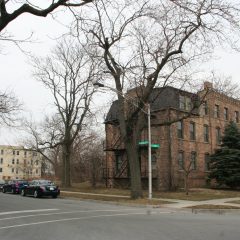 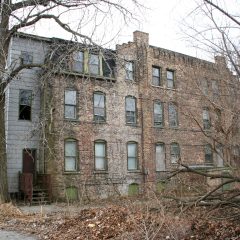 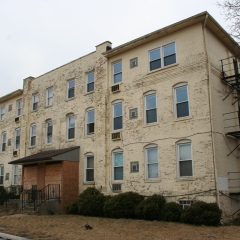 The original, historically protected, apartment buildings were in an extreme state of disrepair and required extensive structural intervention to restore them to their former glory. In addition, Stantec had to bring their interiors up to modern building code and living standards. Though in poor condition at the beginning of the project, at least they were still standing. The row house between them wasn’t so lucky. The building was demolished in 1930.

As I came to learn, The National Park Service (NPS) has strict codes for construction and rehabilitation of historic projects like these. If you’re interested, the codes are outlined in The Secretary of the Interior’s Standards for the Treatment of Historic Properties.

In place of the structure destroyed in 1930 Stantec built a modern apartment building. As Bill Ketcham – one of Stantec’s principal architects – explained it to me, “we used modern technology and clues from history to design this building.” The new structure references traditional Pullman door, window, and masonry details, along with the signature mansard roofs of the flanking buildings. Inside, the units feature open plans with moveable storage units and partitions – likely not featured in the original apartments.

Now, if you’re wondering why Stantec didn’t design the new building with period specific finishes and antique materials, there’s good reason. The NPS’ Standards for the Treatment of Historic Properties forbids it.  While a building can “re-create the appearance of the non-surviving historic property in materials, design, color and texture,”…”A reconstruction will be clearly identified as a contemporary re-creation.” In other words, the NPS wants visitors and residents to easily discern the difference between new and old.

At the time of writing, this project has won five awards: the Chicago Building Congress Merit Award, Renovation and Adaptive Reuse Under $15 Million; the 2021Commission on Chicago Landmarks Preservation Excellence Award, 2020; and the 2021 Landmarks Illinois Richard H. Driehaus Foundation Preservation Award for Rehabilitation; the 2021 Real Estate Journal Award for Public Housing; and the 2021 Real Estate Journal Award for Multi-family and Mixed Use Redevelopment.

After scouting the site with Stantec in late summer to familiarize myself with the project, we set a tentative date for mid-fall after the foliage began to turn. We had a plan in place, all we had to do was wait. The goal of this project was to capture exteriors (for now) from the ground and via drone.

In late October our shoot window opened. After coordinating the project with tenants and building management, we had a hard date set. The day started off clear, but when we arrived, clouds started to move in. Before we lost the sunlight, we prepared the drone for a quick first flight. After running through our safety checklist we popped the drone up and were able to knock a couple shots off our list. Minutes later full overcast set in.

While I’m not afraid to postpone a photoshoot to wait for ideal conditions, I do my best to execute projects on the planned dates. Especially in cases where other people and stakeholders are expecting my visit – or are a part of the photoshoot. But thanks to a couple fantastic weather and satellite apps, I was confident that the clouds would clear in short order. So we waited for about 45 minutes. Right on cue, the sun’s rays began to break through the thinning clouds. We quickly got to work on photographing the western elevation from the ground. For a majority of the non-drone photos I used my Nikkor 19mm PCE (Tilt-Shift) lens. This lens is a must-have for architectural photographers. I can’t say enough about it, and maybe I’ll do so in another post.

Soon after we had our angle set, one of the Artspace Loft’s residents came out to say hello. Alexis, and aspiring actor, was more than happy to help us out. We worked some angles with her on her new porch with the existing building in the background. To all of us, this was one of the favorite photos of the entire project. The streetscape was activated with people. The sky was gorgeous. And we had a nice juxtaposition between the old and new. After working a few more ground angles from various points, we sent the drone up once more for some photos of the west facade lit by he sun. But in less than an hour another bank of clouds moved in and it effectively wrapped our shoot. Thankfully, by that time we already had all the shots we set out to capture.

Here are a few more photos. Additional details are included as captions in some of these images. 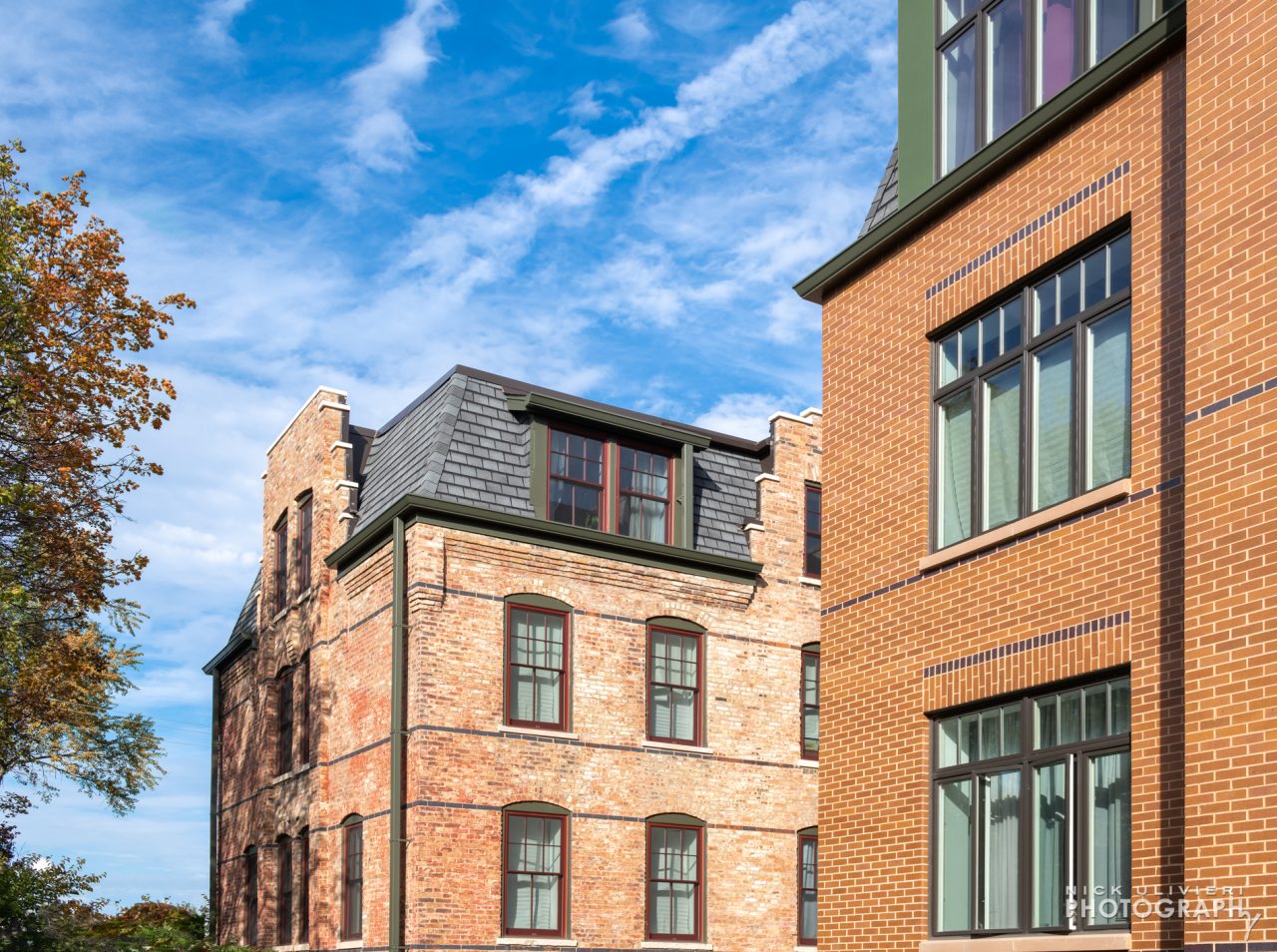 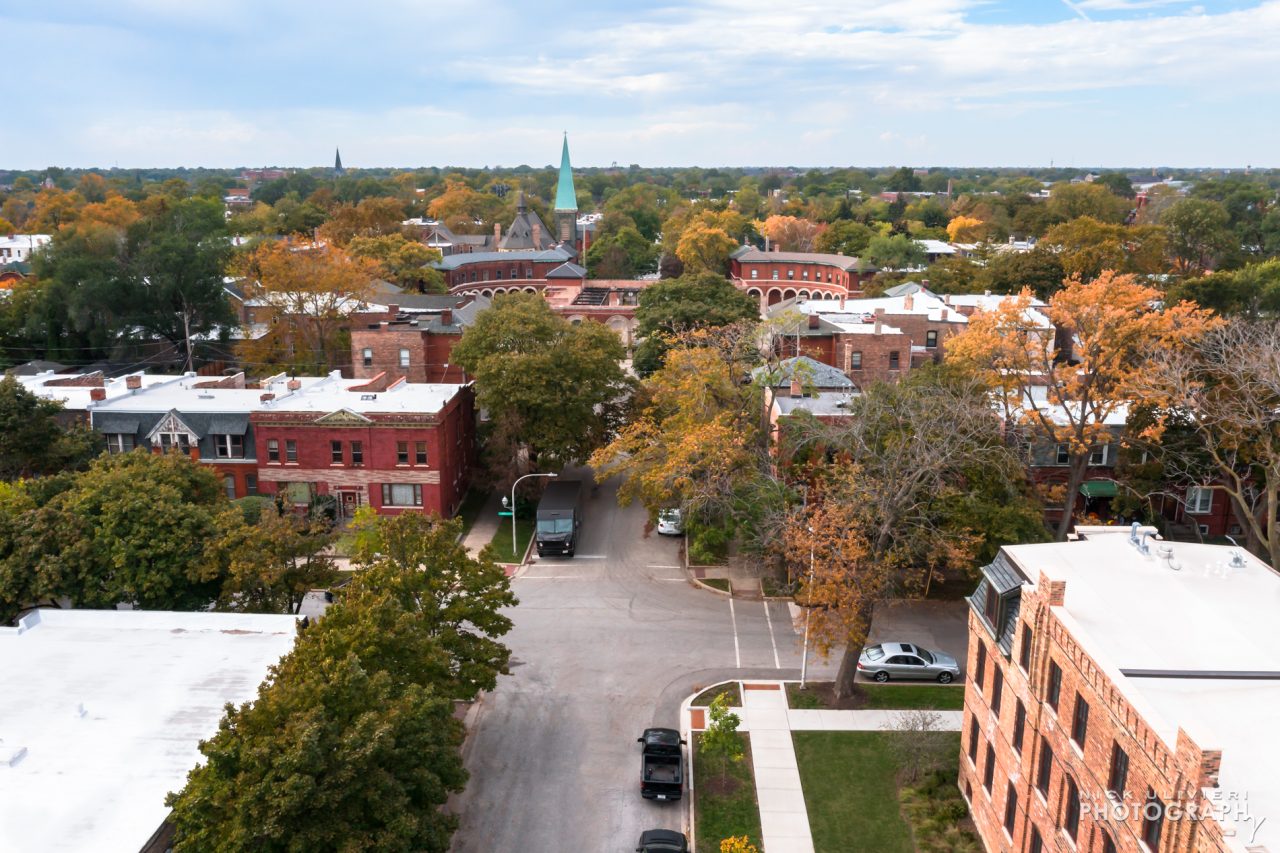 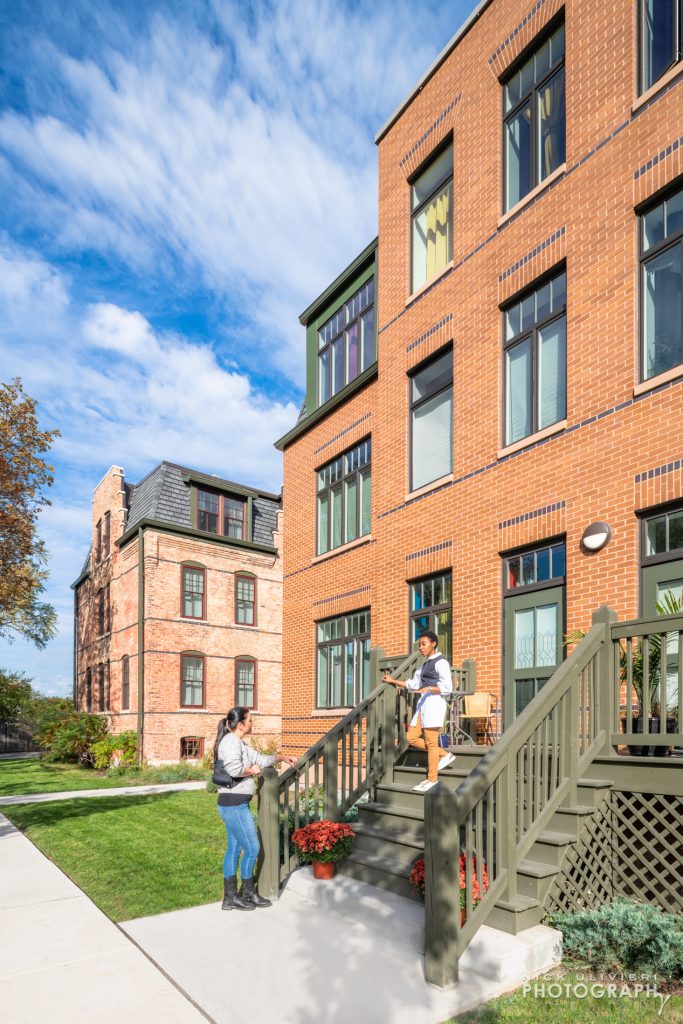 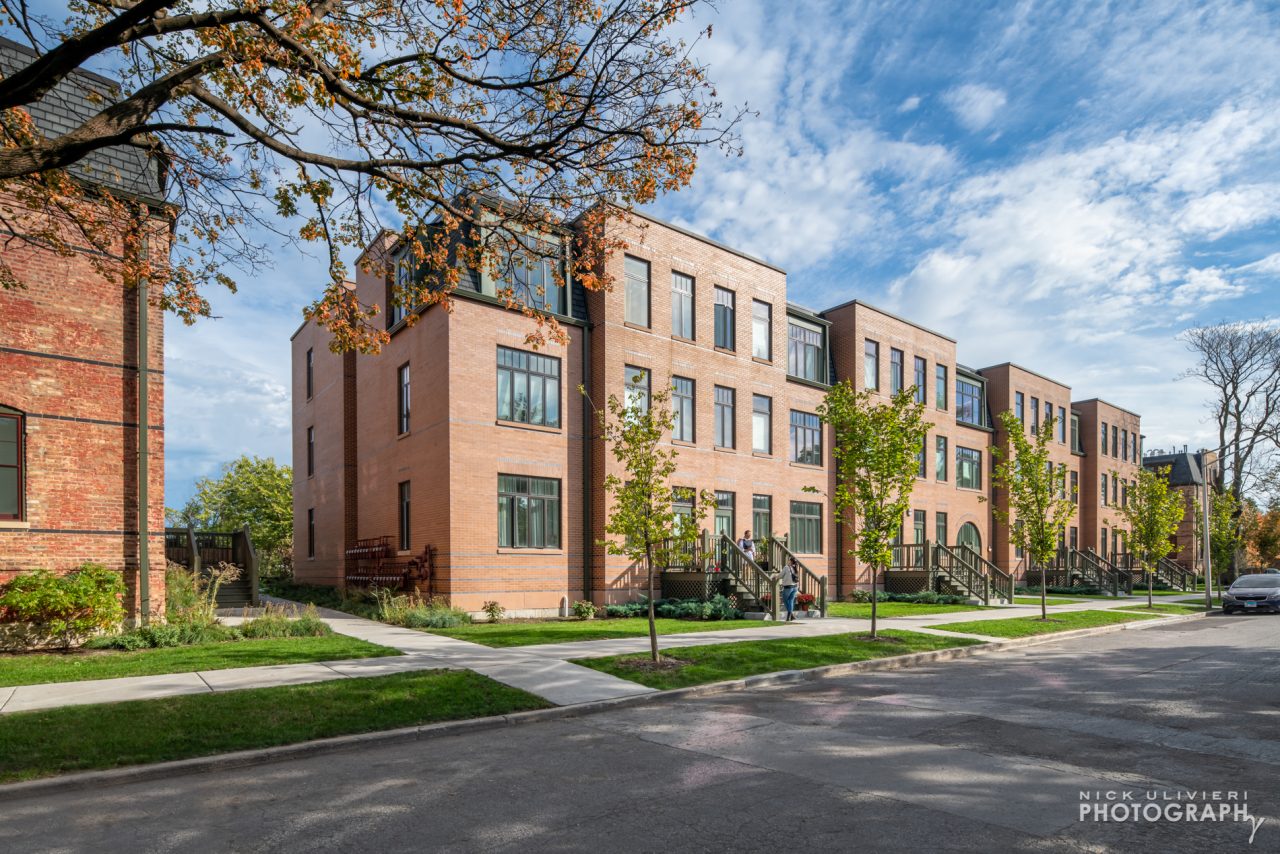 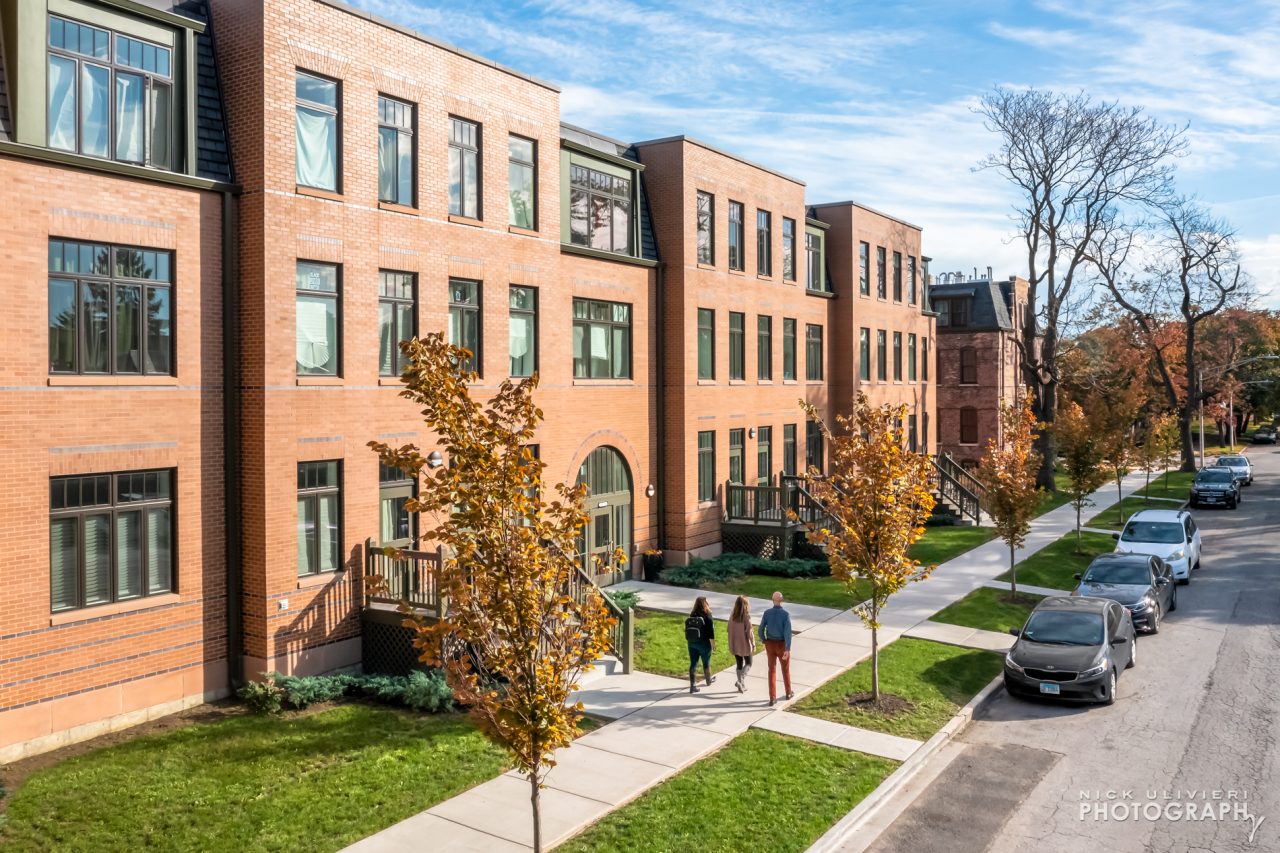 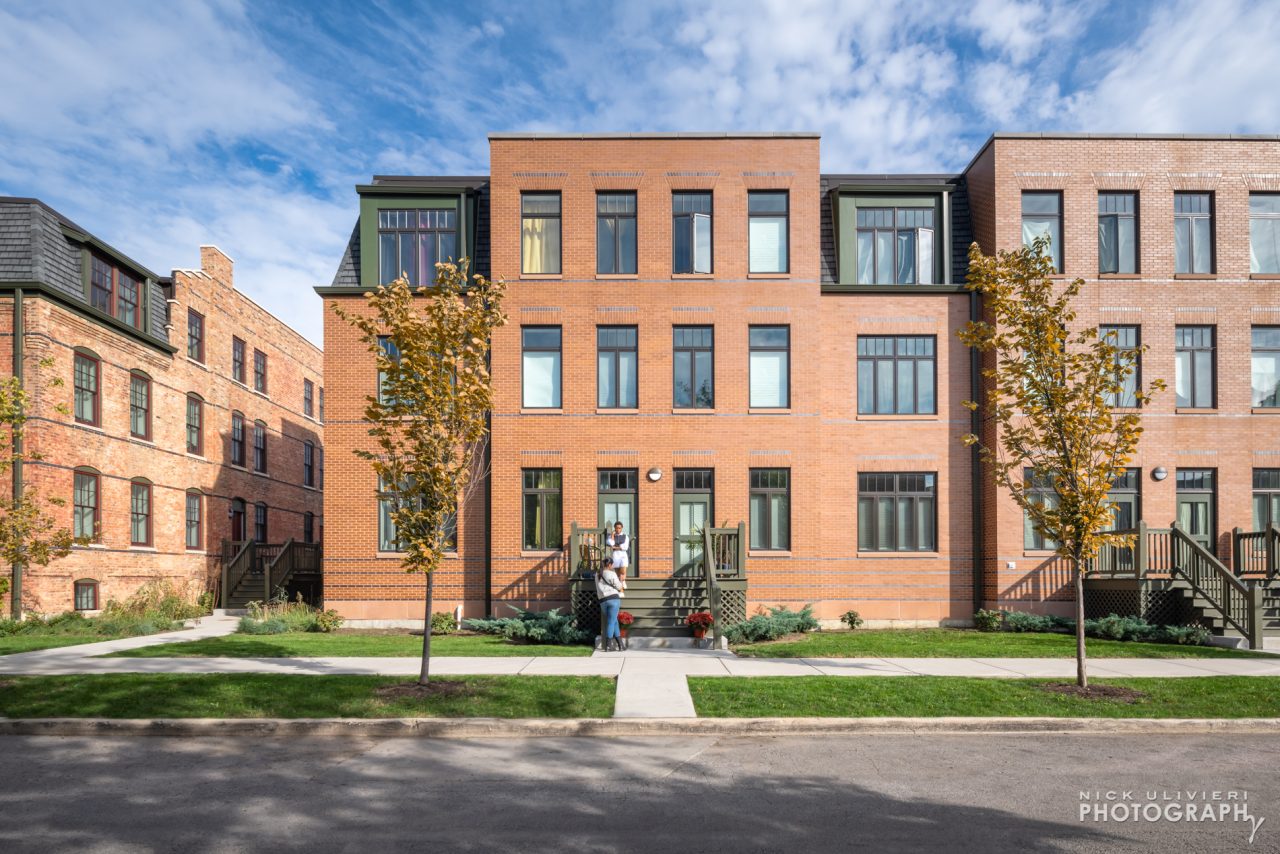 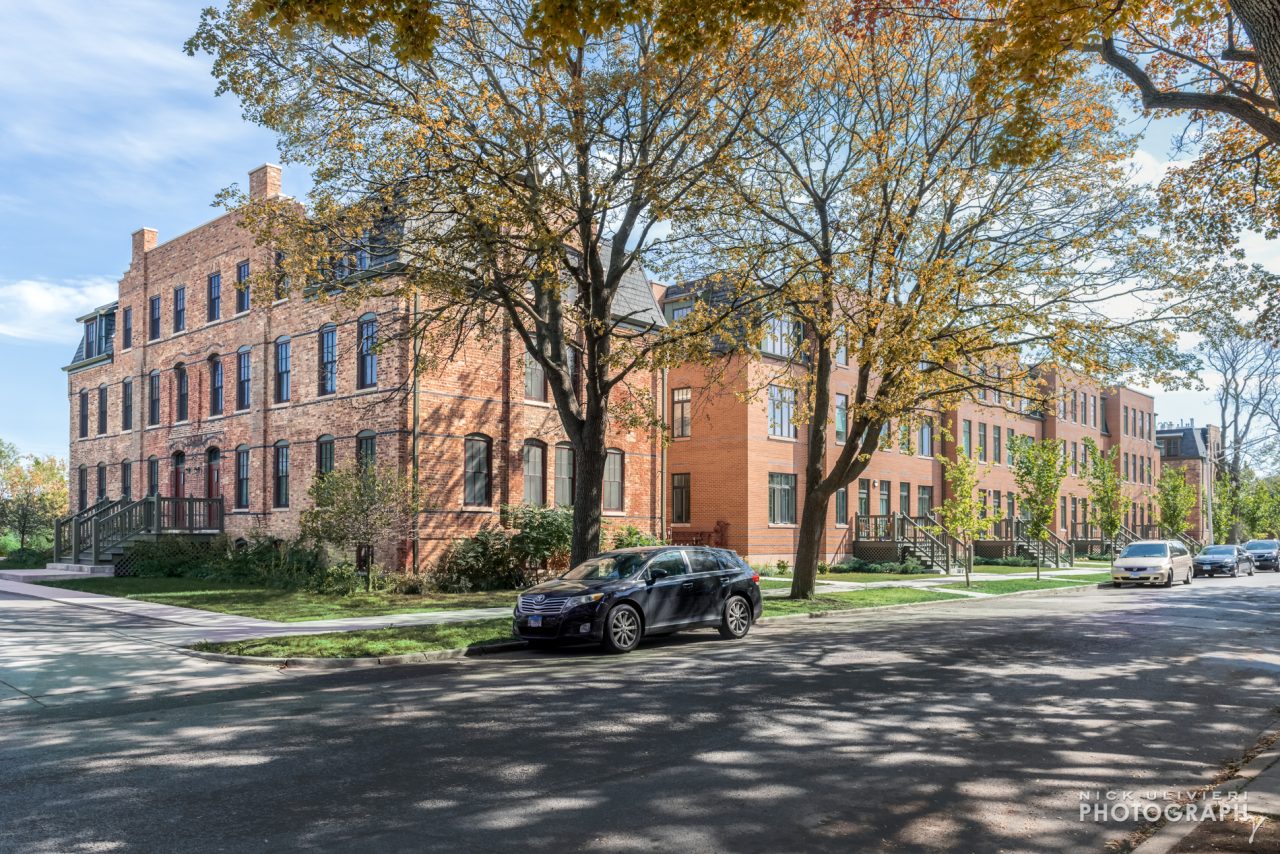 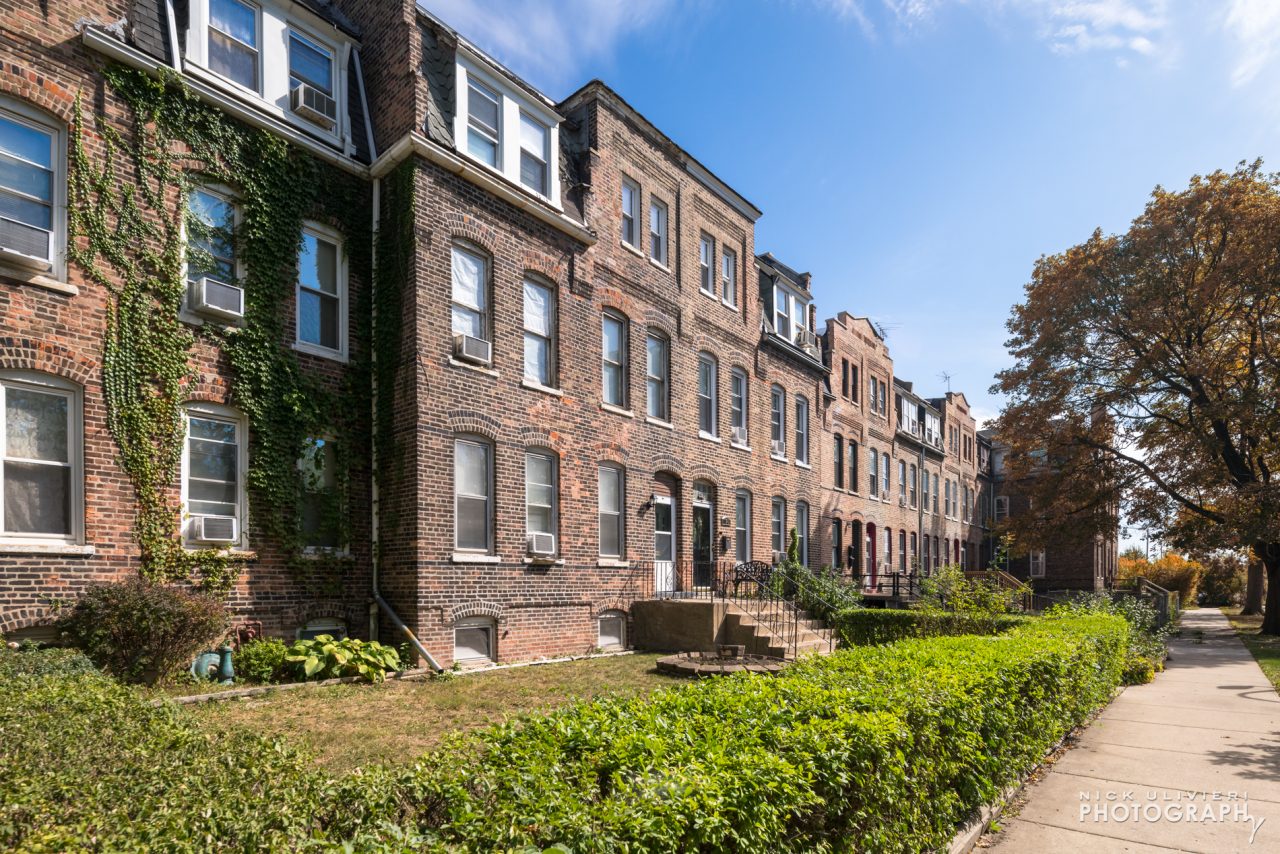 George Pullman built his namesake neighborhood in the 1880’s to house the workers of his company – The Pullman Car Company. Here, workers built the famous Pullman railroad sleeping cars. After riding on an overnight train, inspiration struck Pullman and he was determined to build a better ‘sleeper’ car for overnight rail trips – a common occurrence of the day. After Pullman set-up shop in Chicago, the company-owned neighborhood soon followed. Pullman, the neighborhood, was essentially the first planned industrial community in the United States. This town met all the workers’ needs – it had housing, a market, a hotel, parks, and a school for children.

Not only did the Pullman factory build the cars, they also owned and operated them on most of the railroads in the United States. To do so, they paid railroad companies to couple the cars to their trains. When the Pullman Company peaked in the early 1900’s, its cars accommodated 26 million people a year. Some referred to Pullmans as “the largest hotel in the world.” A moving hotel, to be fair.

Though the company prospered during the railroad boom at the turn of the century, an economic downturn in 1893 hit the town hard. George Pullman cut pay, but refused to lower rents. The cost of gas and water increased to the chagrin of its residents. In response, Pullman workers went on strike and a nationwide boycott against railroads that used Pullman cars ensued. At its peak, the boycott involved nearly 250,000 workers in 27 states. This brought many railroads to a screeching halt.

This became a Federal issues so the U.S. Government involved themselves. City by city, federal forces broke strikes and boycotts to get trains moving again. The two month long strike ended violently after the U.S. Government arrived in Chicago to intervene. After the dust settled, U.S. forces killed up to 30 workers and injured dozens more. The strike led to new rights for workers and the creation Labor Day as a Federal holiday.

Chicago annexed Pullman in 1889, and in 1907 Pullman was forced to sell the company’s non-industrial assets (i.e. the houses, apartment buildings, etc). Despite the town’s official separation from the company, the neighborhood’s success ebed and flowed with the success off the company. But in 1955, the factory closed. Thanks to cars and airplanes, the demand for high-end railroad sleeper cars plummeted. Local job prospects dwindled, the neighborhood took a downturn, and residents flocked to the suburbs – likely via the growing expressway system.

In late 1960s, some business people proposed demolishing Pullman to build a modern industrial park. But the residents wanted to save their unique community. In 1972 the Pullman Historic District received National, State, and City landmark status to protect the remaining row houses and public buildings. Then, in 2005, President Obama declared Pullman a National  Monument – paving the way for an historic restoration and reconstruction project.

Note: I put together this history “lesson” from various sources. I tired to cover the basics, but there’s a lot to unpack so I recommend checking the links above for more information.