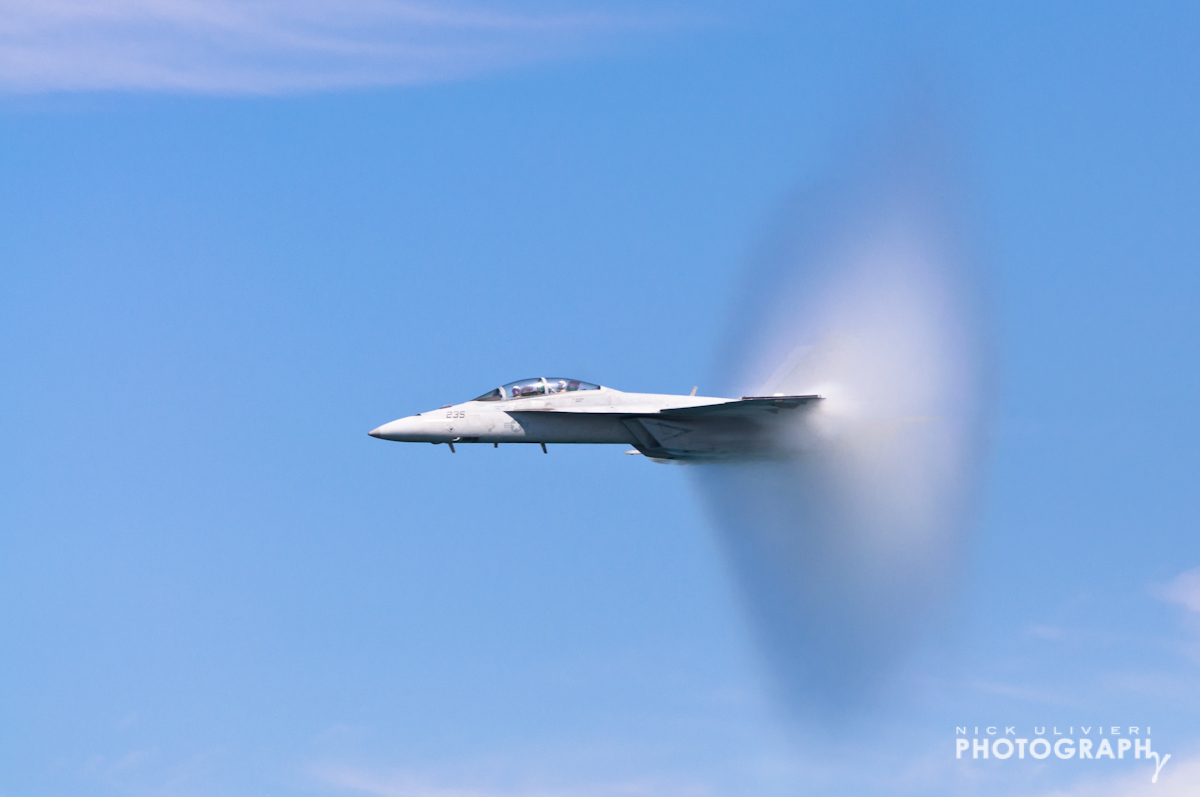 Ever since my first trip to the Chicago Air and Water show some 10-12 years ago, I’ve been enamored with airplanes, specifically military jets.  I can’t help but immensely appreciate the technology, design and engineering that goes into producing something of this magnitude.  At this year’s Chicago Air & Water Show, the Boeing F/A-18 Super Hornet was the star of the show, to me anyway; the USAF Thunderbirds were technically the “headliners”.

About the Super Hornet

After development started in the late 1980’s, the first Super Hornet flew in 1995, and finally entered service in 1999.  The Super Hornet is a twin-engine, carrier-based, multirole fighter aircraft.  The primary user of the aircraft is the U.S. Navy.  Loaded with more firepower, thrust, and general technological advances than it’s successor, the Hornet, the Super Hornet also boasts advanced radar signature reduction methods.  In other words, it employs materials and battle tactics to make it more “stealthy” than its predecessor.

The Super Hornet has an internal 20 mm gun and can carry air-to-air missiles and air-to-surface weapons. Additional fuel can be carried with up to five external fuel tanks and the aircraft can be configured as an airborne tanker by adding an external air refueling system.  The Super Hornet also boasts a top speed of over 1,190MPH (Mach 1.8+).

As usual, I can go on, but I’ll let you do your own extra research. I’ve included some links below. Now – on to the photos

Taken at the 2011 Chicago Air & Water Show, the particular jet featured in these photos is the two-seat variant, the F/A-18F.  Over the course of two days, it appears as though two different planes performed: #234 & #235.  Both days were extremely bright and sunny (during the jets’ performance anyway) so I was shooting a 1/3200 shutter speed @ f/5.6 and an ISO of 200 on a D5000 (crop sensor) with the Nikkor AF-S 300mm f/2.8 lens. Saturday’s humidity was extremely beneficial for the formation of vapor cones.

People have asked me: “How did you catch that when it’s going so fast?!”.  My answer goes something like this:  “Easy, a fast shutter speed and a smooth pan”.  Much like the jet locks onto its target, you must lock onto the jet with your camera’s focus point.  It can be difficult to spot a plane when it first comes into sight if using a long telephoto, so I like to manually focus to infinity when it is far out so I can spot it through the viewfinder. Once you find it, press the shutter to engage the auto-focus (or use back-button autofocusing).  Luckily, the speed of high-speed passes actually makes it easier to get a sharp shot.  Once it’s locked into your viewfinder you have to follow it smoothly as it approaches (panning).  I’ve found that the speed in which you must pan to keep up with the jet is ideal.  It’s not so fast that you can’t keep up, yet it’s fast enough that the speed at which your body is panning stays smooth and shake-free.

For this type of photography size matter – and I’m talking about your lens. I used a 300mm telephoto on my crop sensor body bringing me up to an effective 450mm focal length. Now, if you feel your lens isn’t up to snuff, don’t fret – you can rent.  I use LenstRentals.com to rent big and specialty lenses. They’re an online service that ships the lens directly to you. After your period is up, you simply drop it off at your nearest FedEx location and you’re done. They also don’t need a full-deposit like many other rental services require. Which is nice considering the lens I use retails for around $6,000. Compared to the price of owning one of these beasts, the rental fees are much easier to swallow, and their service and selection is great.

So you captured it breaking the sound barrier?!

Sadly, no.  A common misnomer of the iconic “Vapor Cone” is that you’ve captured the moment the jet breaks the sound barrier.  However, this is not the case. The phenomenon captured in a few of these images is knows as the Prandtl-Glauert Singularity.  I personally like Vapor Cone or Shock Egg, but it’s nice to know the official-sounding, official word for this type of occurrence!

The actual study of this phenomenon involves  very complex mix of mathematics and aerodynamics that is too advanced for me to fully grasp, but the accepted reason for why it happens is this: At near super-sonic speeds, in suitability humid air, and low-level flight, the air moving over the aircraft’s surfaces causes an extreme drop in air-pressure. This drop of air-pressure is accompanied by a drop in temperature.  When the ambient air is humid enough, this drop in temperature can cause the air in the low-pressure region to fall below its dew-point.  When the temperature falls below the dew-point, the moisture in the air condenses to form a visible cloud of moisture.  And there you have your vapor cone!

Lastly, to the best of my knowledge it is illegal for aircraft to break the sound barrier over populated areas. Though that law does not apply to military aircraft, I believe they adhere to that rule unless there is an emergency or event that requires supersonic flight.  At the close proximity these jets fly to people and buildings at an air show, a sonic boom from a truly supersonic jet can cause hearing and property damage.  Though it would be cool to hear and see one with proper ear protection.