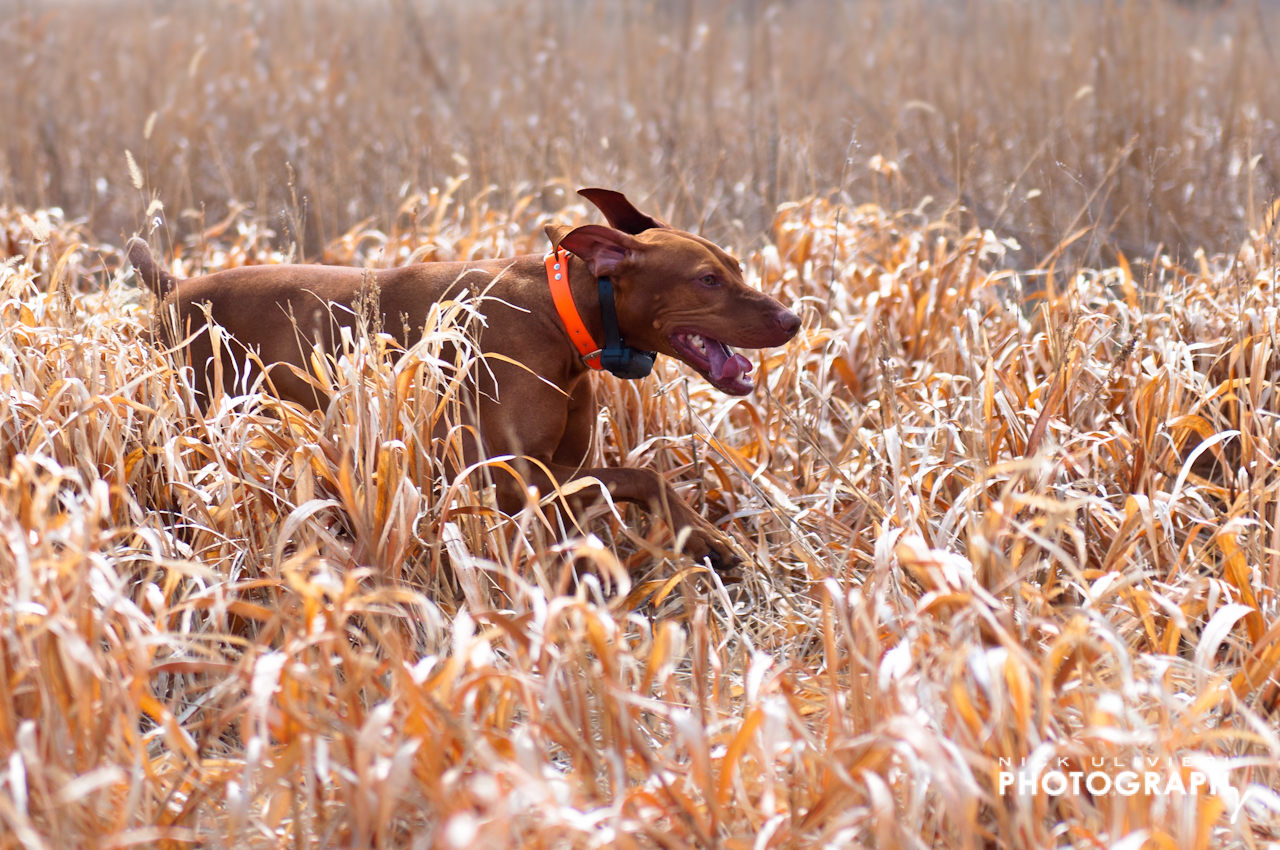 My father has been a hunter for as long as I can remember and my younger brother has been going with him for a long time too.  For me, I was never really interested.  It’s not a moral thing, in fact I’m all for it, but I was never a fan of waking up that early…Especially in my teen years when waking up before noon on a weekend was a deal breaker.

About two years ago my dad got his first hunting dog, a Vizsla named Bosco.  He’s a beautiful dog and good at his job, despite his puppy-like lapse in concentration from time to time.   After seeing Bosco run around in the backyard for the past few years chasing decoys, and hearing about how well he does when he’s hunting, I knew I had to join them out in the field to see/photograph him in his element.

Last month I finally caved and went joined my brother and dad.  I woke up that morning wondering what to wear, and the first thing that came to mind was the scene in My Cousin Vinny when Vinny asks Mona-Lisa what he should wear to go hunting with the lead prosecutor:

Vinny Gambini: What about these pants I got on? You think they’re okay?
Mona Lisa Vito: Imagine you’re a deer. You’re prancing along. You get thirsty. You spot a little brook. You put your little deer lips down to the cool, clear water – BAM. A ******’ bullet rips off part of your head. Your brains are lying on the ground in little bloody pieces. Now I ask ya, would you give a **** what kind of pants the son-of-a-bitch who shot you was wearing?

Anyway,  when we arrived at Green Acres Sportsman Club, I opened the trunk my camera bag fell to the ground and knocked the auto-focus sensor out of alignment.  Long story short, I wasn’t able to get any shots worth sharing, but I did bag my first pheasant!

So this weekend I went again, with a working camera.  The fresh air, warm weather,  and the open space was really a great change of pace from the hustle and bustle of Chicago and watching Bosco’s energy was really something to behold.   I didn’t get any birds on this trip, but that’s OK.  Shooting a good picture is more rewarding to me than shooting a bird.  Unfortunately, this weekend was probably the last hunting day of the year for us.  There are still a lot of shots I missed (photographs & birds) and I’m already looking forward to getting back out there net season!