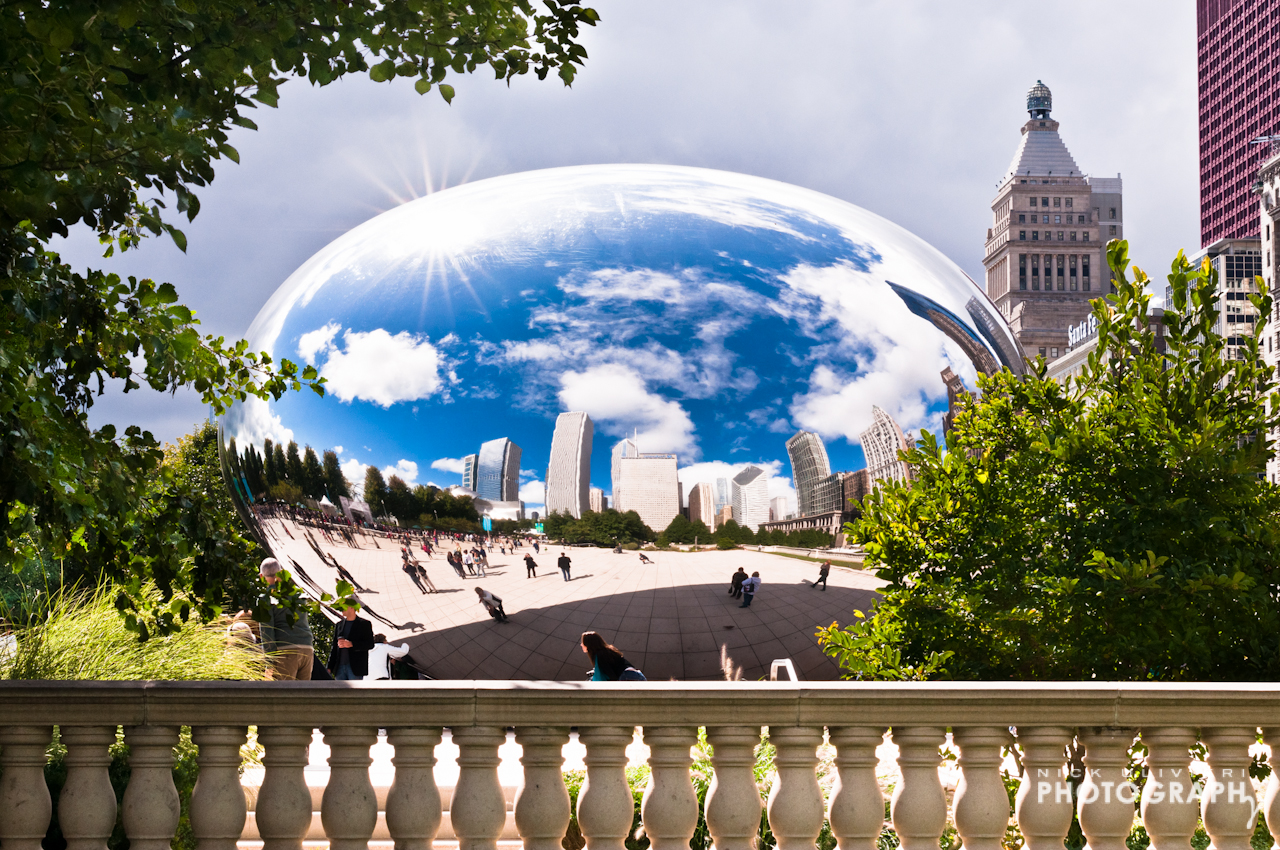 When Millennium Park opened in July 2004, it was 4 years behind schedule (It was called Millennium Park for a reason :)) and $325 million over budget.  Not a great first impression.  But since it’s opening, Chicagoans have forgotten its ominous beginnings and have embraced Millennium Park as one of the great public spaces of the world.

It’s not just the hometown bias that says Millennium Park is a great place. Organizations from around the world have recognized it as a truly special public space, and have awarded it with accolades for its green design and accessibility. In 2005, Millennium Park won the Green Roof Award of Excellence in the Intensive Industrial/Commercial category from Green Roofs for Healthy Cities. Green roof? Where’s the roof?  Well, the entire park is the roof! Millennium Park covers “a structural deck supported by two reinforced concrete cast-in-place garages and steel structures that span over the remaining railroad tracks”.  All this makes it one of the largest green roofs in the world.

Richard Solomon, Director of Graham Foundation for Advanced Studies in the Fine Arts said this about Millennium Park: “This is not simply a background park, where a series of individual objects exist in a field. The objects here have become the field. It is densely packed like the city itself. This is a different idea of an exterior experience than in most parks. It is closer to a theme park or a shopping mall.”

Mayors from cities across America have praised Chicago’s vision in creating Millennium Park – and left many of them wish they had something similar in their cities.  Even the mayor of Shanghai, arguably one of the more forward-thinking cities in the world in regards to urban planning, admired his time spent in Millennium Park.

The trick to fully enjoying Millennium Park is going when it isn’t packed full of visitors.  Early mornings during the week are a great time to take a stroll in the park to appreciate all it has to offer…in peace.  The early morning sun also provides some exceptional light for photographing the abundance of interesting and unique subjects present in the park.

So about some of the main attractions…

Cloud Gate, A.K.A “The Bean”, is Anish Kapoor’s first public artwork inside of the United States. This highly-polished, 3-story, stainless steel bean-like sculpture has quickly become an icon of Chicago, and has been noted as one of the most photographed places in the world.  The sculpture itself is made of 168 welded stainless steel tiles that had to be painstakingly buffed and polished to remove all traces of the welded seams.  Kapoor’s design is likened to liquid Mercury; not only in it’s color and bulbous shape, but also in the way the sculpture distorts reflections.

Much like the rest of Millennium Park, it’s not without controversy. Originally estimated to cost a mere $6 million, the final bill came in at over $23 million.  Construction delays also pushed it’s official unveiling back to May of 2006.  Cloud Gate was first revealed during the original opening of the park in 2004, but at that point the welded seams were still visible.  It wasn’t until early 2005 that it was covered and work commenced on polishing out the seams and giving Cloud Gate its mirror like finish.

Crown Fountain is composed of two 50 foot tall transparent brick towers separated by a black granite reflecting pool.  Designed by Jaume Plensa, the most unique feature of this art installation is its use of LEDs to project the faces of 1000’s of Chicagoans on the inward walls. Not only does it project images, but sheets of water constantly cascade down the sides, with periodic spouts of water shooting out of the puckered lips of the aforementioned faces.

Again, like other notable Millennium Park attractions, controversy surrounds Crown Fountain.  Critics were worried that the 50 foot tall structures would violate the “Free and Clear” spirit of Chicago’s lakefront. Officials also wanted to place security cameras on the tops of the towers to provide 24 hour surveillance. The good news is that due to public outcry, the surveillance cameras were a very short lived plan.

The Jay Pritzker Pavilion is Millennium Parks largest and most prominent feature. This futuristic bandshell was created by Frank Gehry, and adheres closely to his style of design. If you’ve seen any of his other work you know what I mean.  The bandshell and surrounding “Great Lawn” can accommodate nearly 11,000 people (seated and in the grass).  Much like Cloud Gate, a majority of the bandshell is constructed of curved stainless steel plates.  Unlike Cloud Gate, these plates aren’t polished to a mirror-like finish and their seams are visible though expertly finished to fit into the overall design.

My favorite aspect of the Pritzker Pavilion is the trellis structure that envelops the Great Lawn.  Built to support the state of the art sound system, the trellis seems to create an intimate “interior” space whilst keeping the beautiful views of the skyline and surrounding ares of Millennium Park well visible.

Surprise, surprise…this piece was also plagued by construction delays and a bloated budget.  Originally pegged to cost around $10 million, the project ended up costing nearly $60 million.  That’s almost 600% over budget.  Despite all of that extra money I think it still looks a bit unfinished.  Viewed from the front it is truly spectacular.  But get out around its edges, and its backside you can tell a lot of corners were cut. The abundance of exposed bracing and corrugated metal, while well done (considering budget constraints) aren’t nearly as decorative or artistic as the front “headdress”.

The Lurie Gardens is a 2.5 acre park located on Millennium Parks South end.  The park opened on July 16, 2004, and was designed by Kathryn Gustafson, Piet Oudolf, and Robert Israel.  Composed of bulbs, perennials, grasses, shrubs, and trees, the garden has two distinct sections, or “plates”. The dark plate features shade-loving plants that hearken back to Chicago’s woodland past.  The light plate features sun-loving perennials that thrive in the heat and light.

I know, the Modern Wing isn’t technically a part of Millennium Park, and I plan on giving Renzo Piano’s structure its own #ChicagoLandmarks post, but I couldn’t help but mention it here.  Not many public parks, especially of the magnitude of Millennium Park can boast such a structure just across the street – or bridge.  Simply cross the award-winning, 650 foot Nichols Bridgeway and you have a seamless transition between these two modern-day cultural icons. More on the Modern Wing to come, hopefully soon!

I think Blair Kamin, the Pulitzer Prize-winning architecture critic for the Chicago Tribune, said it best “…a park provides a respite from the city, yet it also reflects the city. In that sense, all of Millennium Park mirrors the rebirth of Chicago … the ambition of its patrons, the creativity of its artists and architects, and the ongoing miracle of its ability to transform a no place into a someplace that’s extraordinary.”