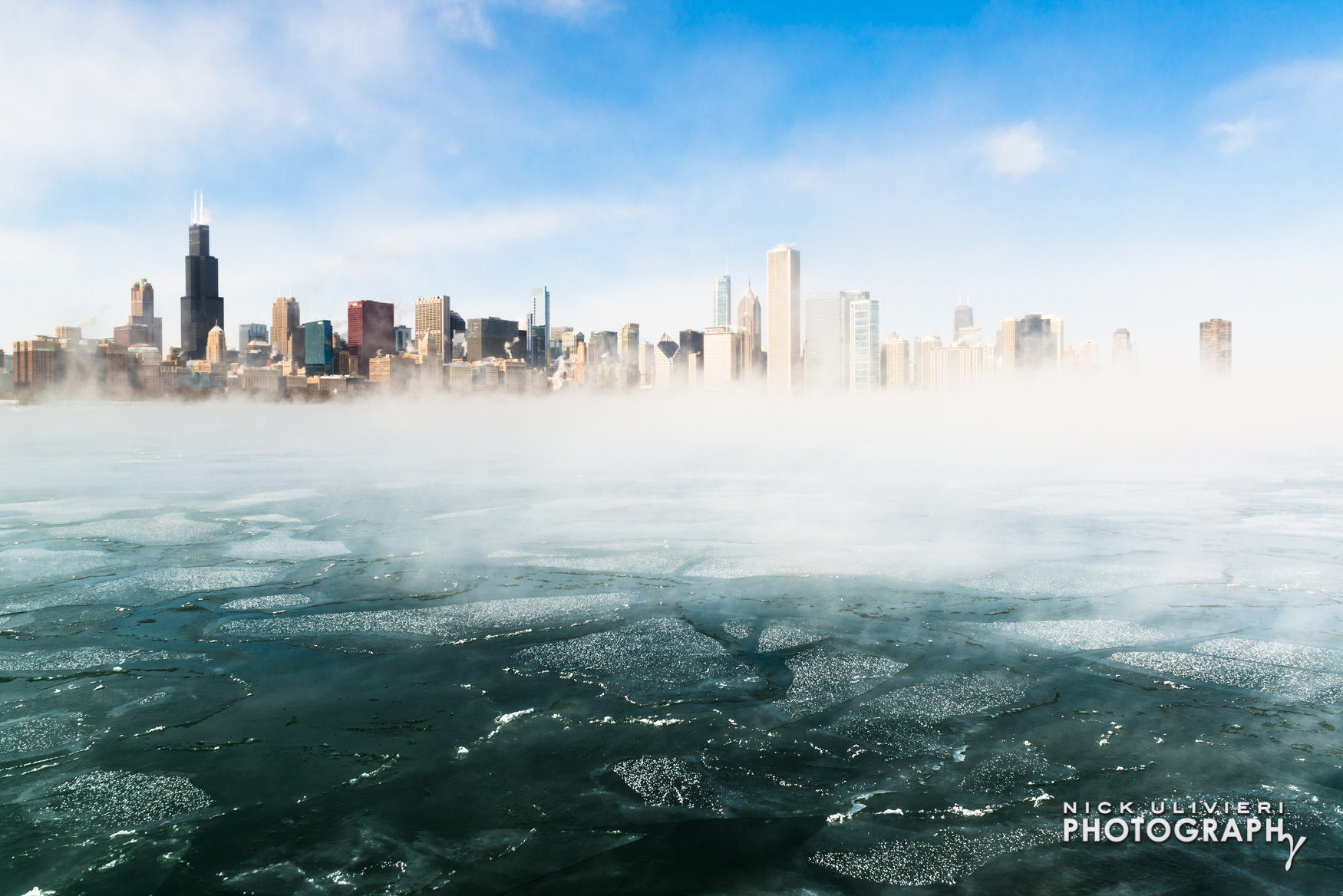 The landscape of Chicago was destined to resemble the arctic before the clock struck midnight on New Year’s Eve. That day began and ended with a rather healthy snowstorm, followed by more of the same on New Year’s Day. By Thursday, January 2nd the city was covered in a dense blanket of snow, but this was just the precursor to the impending polar vortex.

That morning, I bundled up in my snow gear, packed my photo equipment, and took a ride down to the South side of Chicago (Jackson Park) to capture the snowscape. My goal was to capture the landscape at Osaka Japanese Garden, but with so much snow and a dull grey sky, the photos weren’t really coming out well so I made my way towards Promontory Point to see if I could photograph the skyline.

As I trudged along the lakeshore, the wind whipped and visibility across the lake would deteriorate then improve within minutes. On a clear day, the skyline is unmistakable from the northern edge of the peninsula, but at the moment I arrived, it was invisible. I hung out here for a bit, but the skyline was almost completely shrouded in a dense wall of lake-effect snow. I waited here for a bit, but nothing happened. The wind was howling unimpeded off the lake directly into my face and I decided I’d start making my way back to the car. A few moments into my hike, I turned around for one last peek, and the city was revealed. What was once a wall of lake-effect snow now became a faint veil over the city as the precipitation momentarily tapered off. I ran back to my pervious spot, almost totally wiping out on a hidden patch of ice, and got the shot I was waiting for. 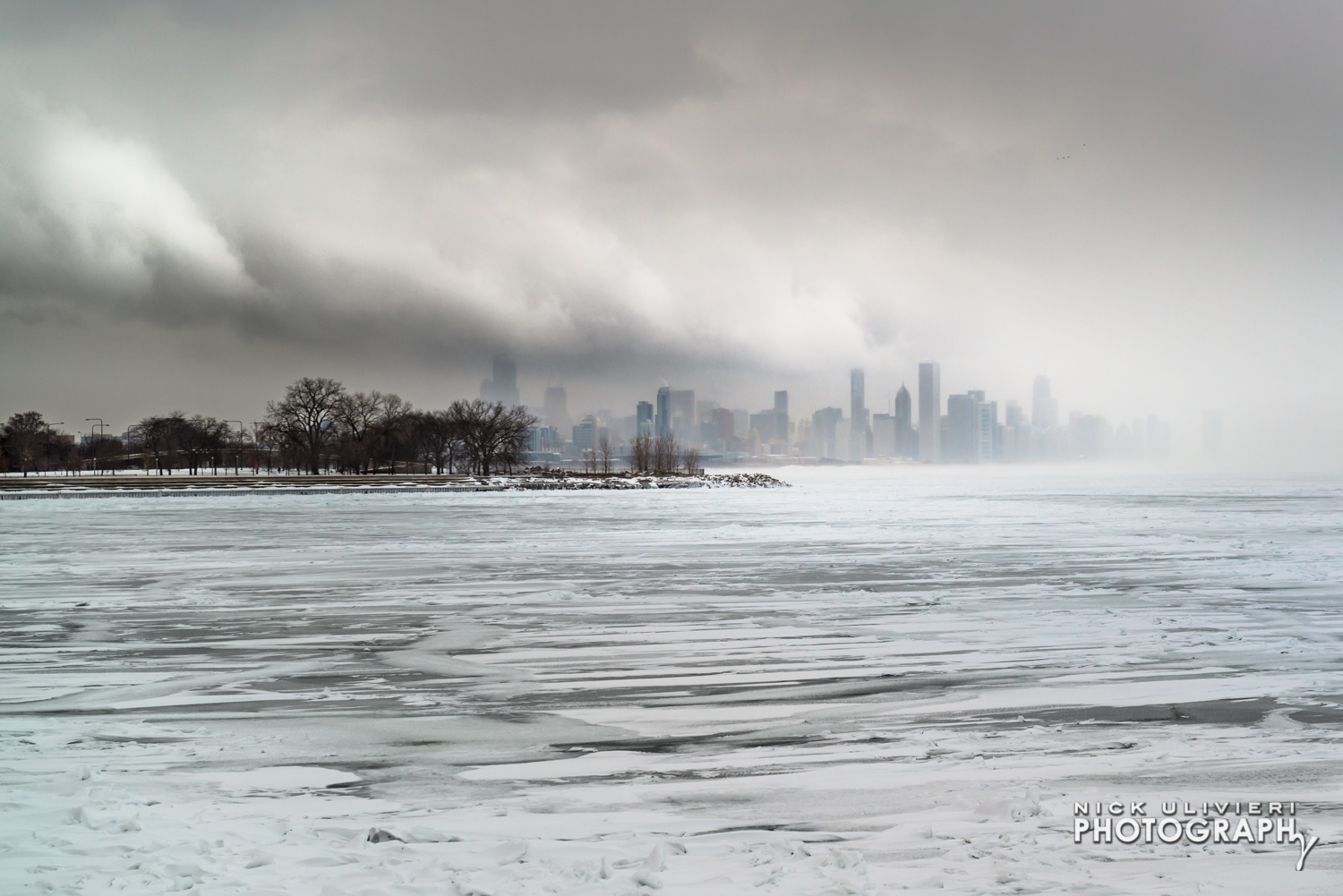 I went out again for a few hours Sunday afternoon to take some shots of a snow covered Millennium Park, and that went well, but nothing I shot during that outing compared to what I caught on Sunday night.

By 10:00pm the temperature was falling fast, and the polar vortex was beginning to grip the region (Sidenote: The polar vortex is an actual meteorological phenomenon, not just a trending hashtag made up to describe super cold weather). With my weather station reading a temperature of zero, I stepped outside onto my balcony to experience the cold with my camera in hand. Then I looked to the southern sky and noticed this tendril, hanging from the cloud deck. I quickly cocked my head inquisitively, murmured something about a ‘snownado’, trained my camera towards the funnel, and snapped off a handful of frames. The formation only lasted a few moments so once it dissipated  I hurried back inside and posted the above image to Facebook and Twitter to see if anyone could tell me what it this structure was…it quickly went viral. 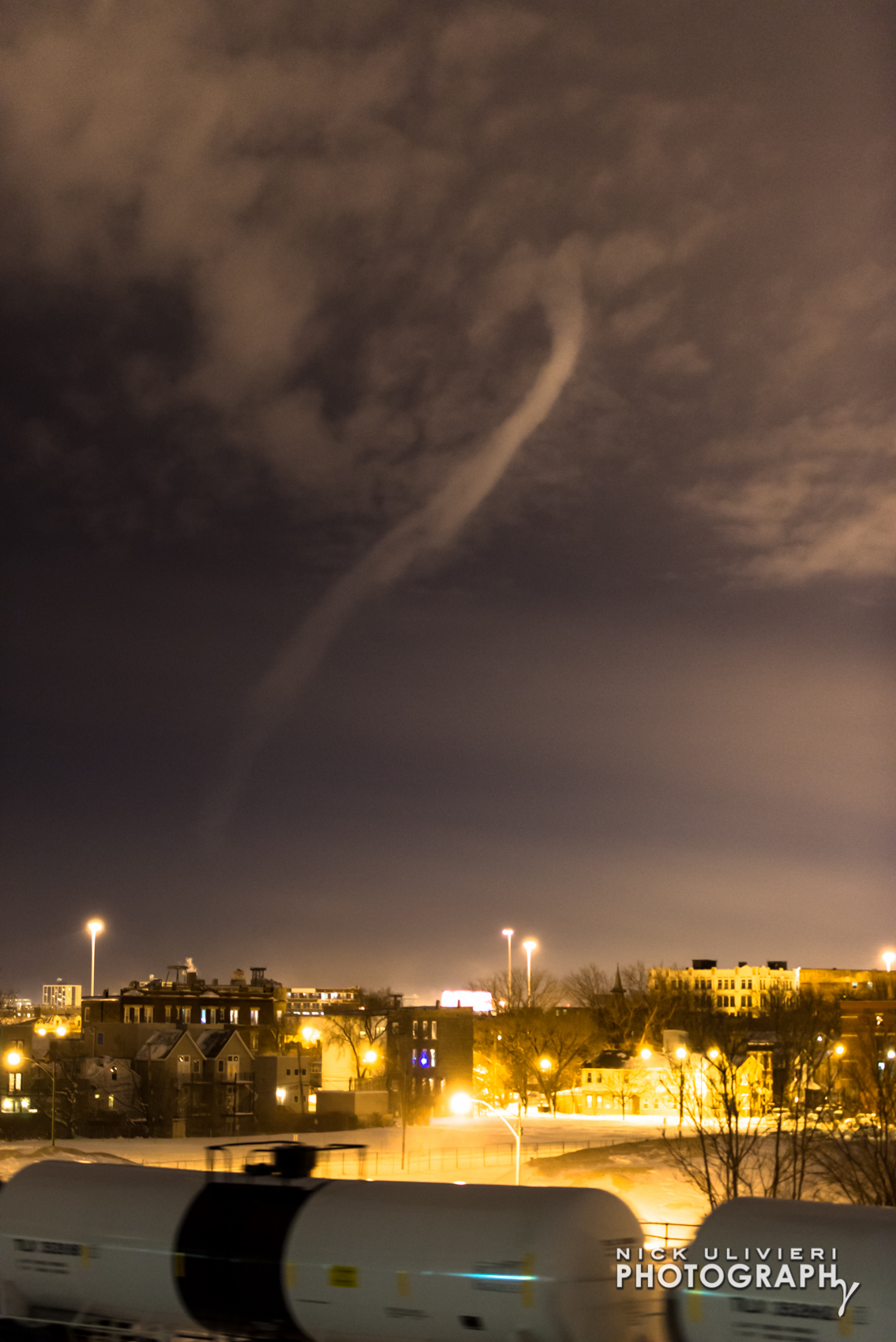 Tweets, Retweets, and Facebook comments came streaming in. In the end there were about 5-6 potential explanations for what I captured, but despite all of the detailed meteorological analysis there didn’t seem to be one phenomenon that completely fit with what I saw. The two most probable explanations I heard were; a rare winter waterspout, or a steam devil. Either way, it was a fascinating, and potentially ominous sight to mark the beginning of  #Chiberia – the trending social media battle cry for Chicago’s polar vortex experience.

After all that shooting I did Thursday and Sunday coupled with a late night social media-ing the ‘snowando’, I told myself I wasn’t going to head out again on Monday. The polar vortex was creating some dangerously cold conditions, and I already had a good amount of wintry city shots, but that all changed when I saw an early morning report about Lake Michigan ‘smoking’. I had to get out there to see and document this…despite temperatures approaching -15° with wind-chills falling below -45°.

By 11:00am I was as bundled up as I’d ever been before. I put on two pairs of insulated socks, multiple pant layers including snow pants; Under Armour cold weather gear, a hoodie, a sweatshirt, a down jacket and another winter jacket shell on top of that. I even wore two hats, a double layer of gloves, and a winter mask. Though this would soon prove to be inadequate for the conditions. 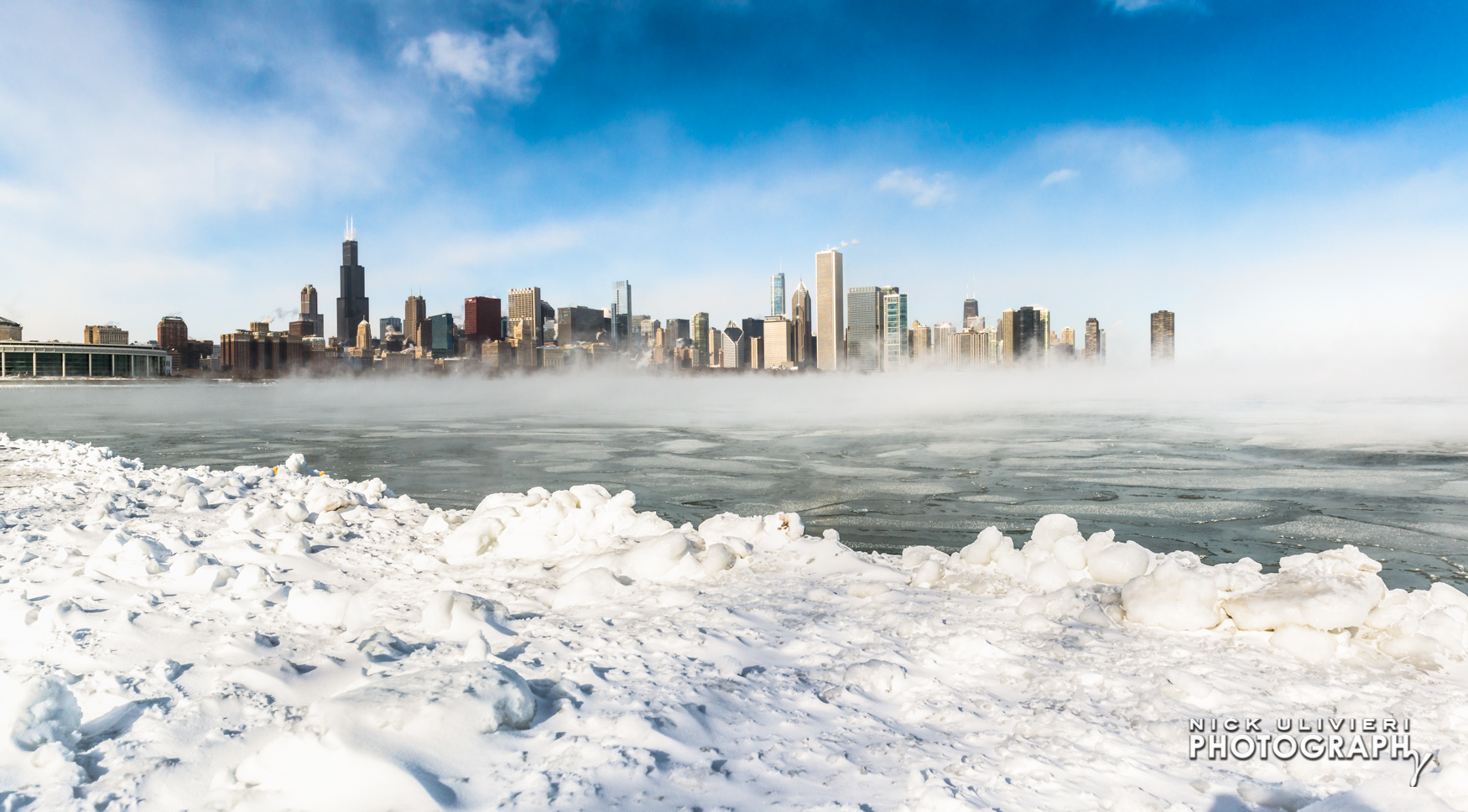 When I arrived at the lakefront, near the Adler Planetarium, I was absolutely giddy. All but a two or three brave souls were out and about. One of them being a one-man news crew, and a few onlookers who didn’t seem at all prepared for the bone-chilling cold they were undoubtedly experiencing. Most importantly, the views through my windshield were already stunning.

As soon as I got out of my car the cold began callously slicing through all of the layers I so carefully insulated myself in…I think Mother Nature was mocking my attempt at staying warm. I knew right then I wouldn’t be out here long. Once I was acclimated to the conditions (I use that term loosely), I turned my attention to the task at hand – documenting this extreme weather. I pulled my camera out of the bag and quickly realized that the cold wasn’t my only enemy. Simply manipulating the camera’s buttons and dials with two pairs of gloves and already numbing fingers was going to be a challenge.

I’ve been to this spot along Solidarity Drive many times before, but it has never looked or felt anything like this. The sky was blue, and the sun was shining; traits Chicago hadn’t seen in days up to this point. And then there was the “steam”. But what was rising off the lake isn’t technically steam at all. While bodies of water often steam when the temperature differential is great enough, it’s not often, at least around here, that the air temperature is bone-chillingly arctic enough to make the relatively warm water condense immediately into tiny ice crystals. It’s almost like the Lake Michigan is snowing – sort of.

As I made my way down to the lowest level of the tiered path to start shooting, I was periodically enveloped in plumes of this crystalline fog as the blustery winds shifted. There were moments in which I couldn’t see more than few meters from where I was standing, so I had to time my shots in between these periods of obscurity. Luckily, most of these didn’t last for more than a few moments so I was able to get a good amount of skyline shots in a short amount of time. 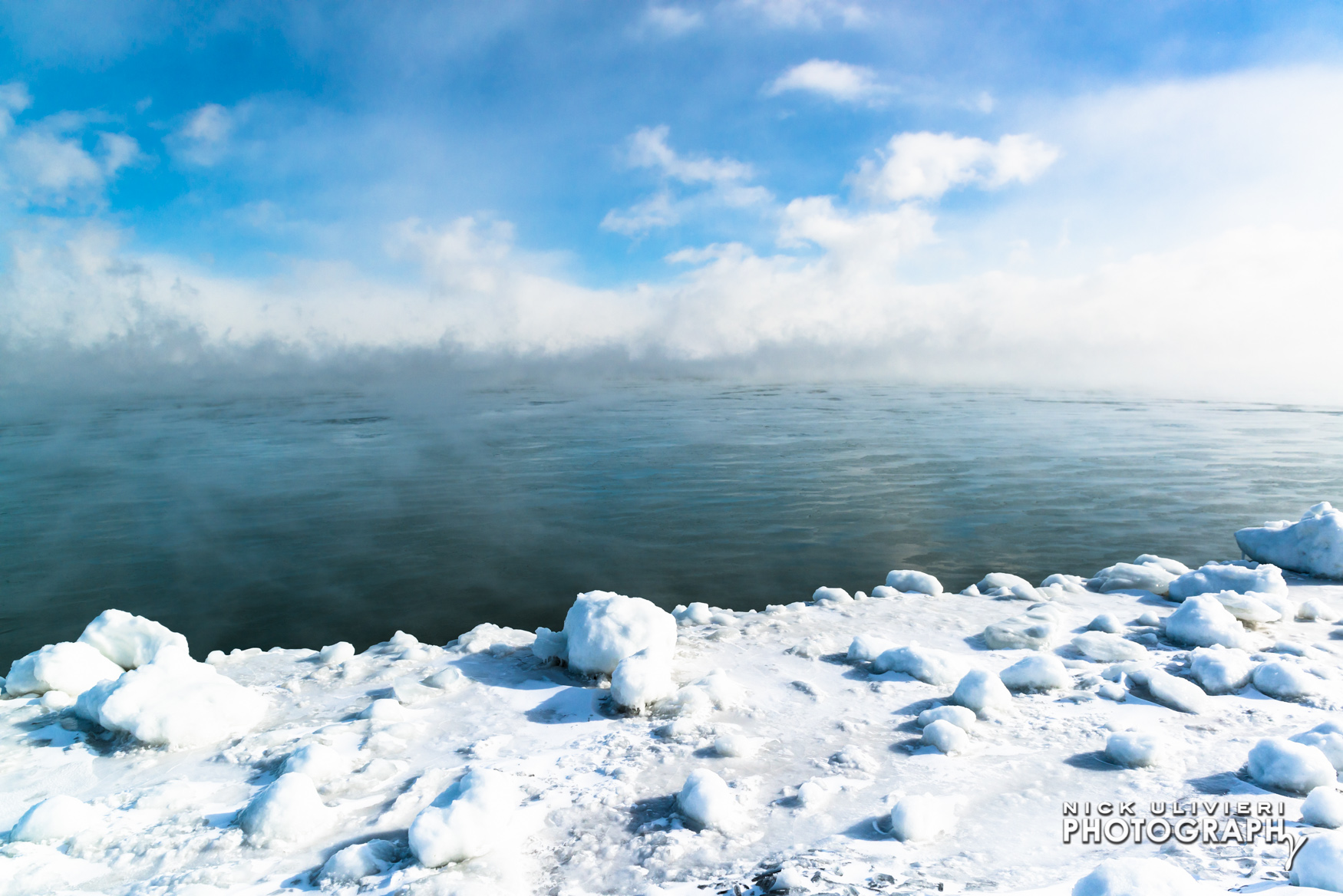 Seemingly happy with the skyline shots, I followed the lakefront path to the backside of the Adler Planetarium to East over the lake. It was an eerie scene. What is usually a giant concrete slab appeared to be the edge of an arctic ice shelf, with this ‘sea smoke’ rising in the distance and forming massive lake effect clouds.

By this point though, the safety of my extremities began to replace photographic composition as my mind’s primary concern. Only about 15 minutes into the shoot, my fingers were seemingly numb yet painfuly stinging at the same time. All the while frosty air continued to seep through my onion-like layers.  Even the inch and a half rubber sole of my snow boots couldn’t keep the cold from encroaching as my toes were enduring the same feeling as my fingers. And an even stranger sensation began to make itself known: The inside of my nose  and eyelashes began to freeze. This was my it’s-time-to-retreat alarm. It was time to go home. 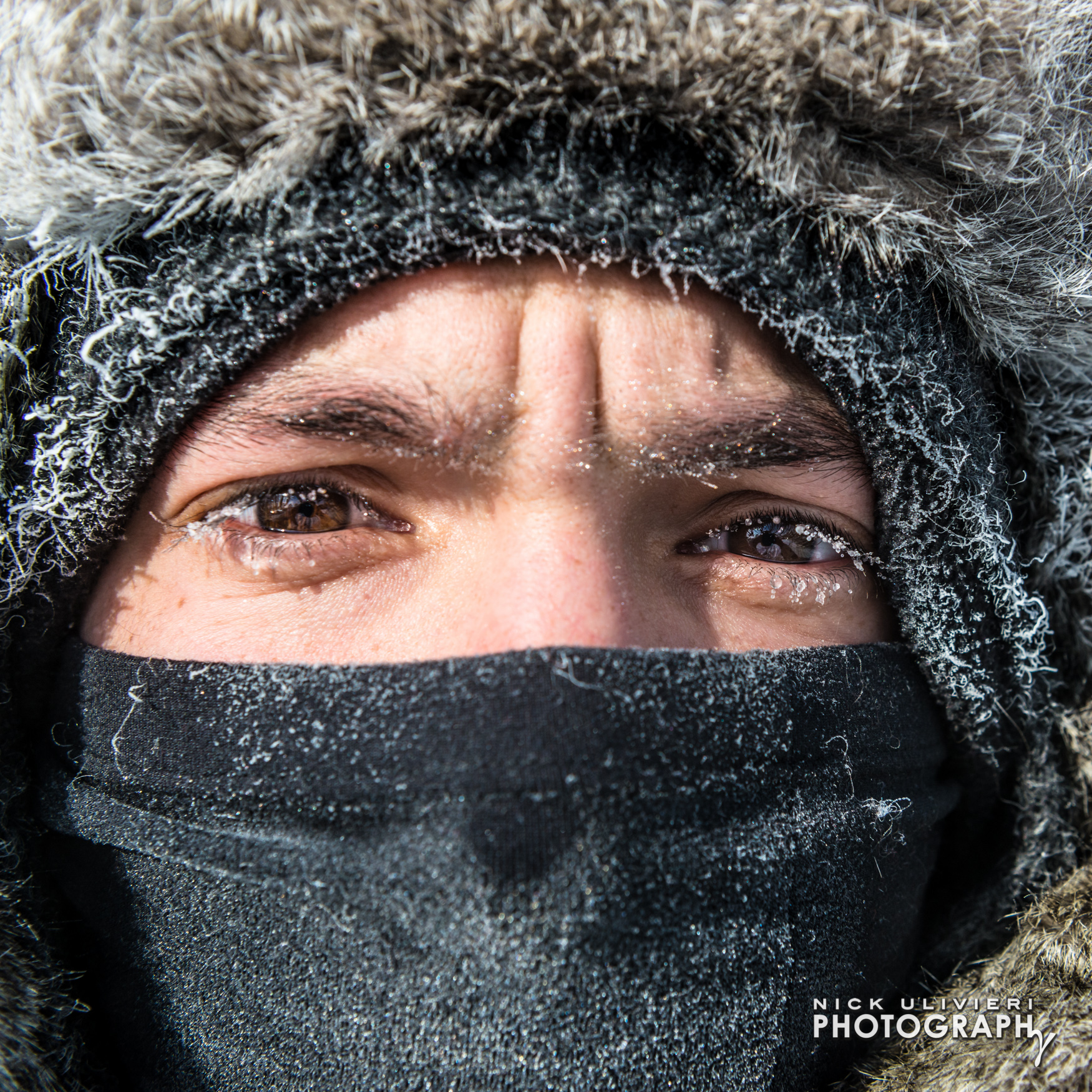 When I finally returned home and thawed out, I was exhausted. What amounted to a 25 minute, 200 yard walk felt like a multi-mile, day-long hike. It’s quite surprising how much energy one’s body requires to keep itself warm and functioning in such an extreme environemtn. But all that hard work was rewarded. Later that day, after a few hours of editing and a pot of coffee, I received a direct message through twitter from CBS 2’S Brad Edwards asking if he could interview me about my “Chiberia” experience, and I obliged. What a week…