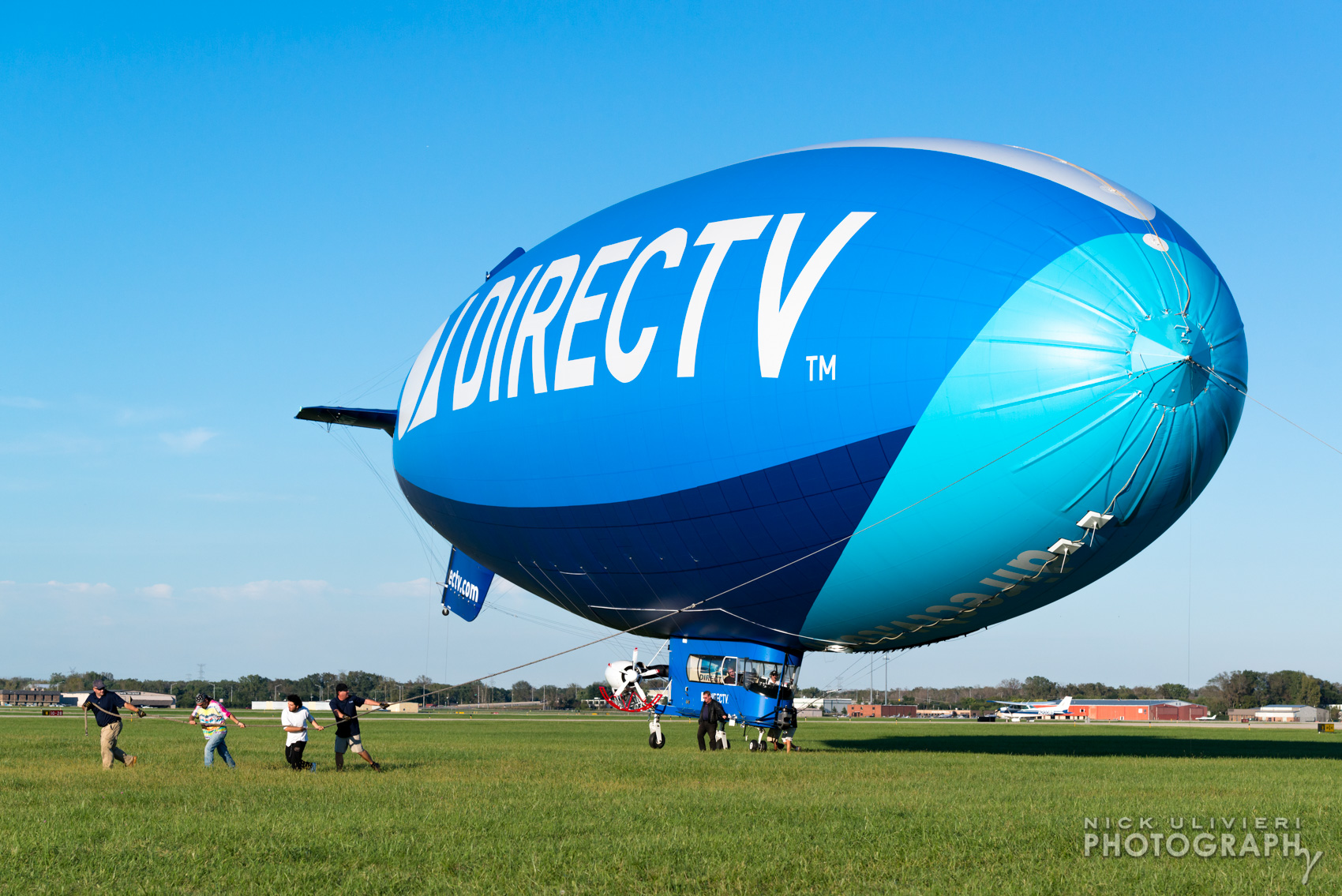 Aboard the DIRECTV Blimp

A few years ago I had an amazing opportunity to take a ride in the DIRECTV Blimp (you can read more about that flight here). At the time, I thought that would be my only opportunity to fly in a blimp. But I was wrong. A few weeks ago, my friends at Van Wagner Aerial Media reached out to me to see if I wanted to take another ride – and this time I could bring friends AND we’d head into the city!

The DIRECTV Blimp is a 178-foot long A-170 LS (lightship). It measures 178ft in length, 46 feet in width, and can hold an impressive 170,000 cubic feet of helium. The gondola is capable of carrying up to eight people and is the largest in Van Wagner’s fleet. It takes a team of 16-20 experienced members to support the blimp up to 345 days per year. The crew will travel approximately 45,000 miles as they work to cover 90-100 TV events. As I learned, it’s a job that takes dedication, patience, and focus.

The biggest challenge with a project like this is scheduling. The airship itself has difficulty flying in high winds or inclement weather so a flexible schedule is key. We had a range of days marked out, and when the window finally opened, the weather was perfect for blimping. As much as I love a photographing a perfectly clouded sky, it’s tough to beat a crispy clear blue sky and super calm winds when it comes to blimping. I was joined by my friends Brandon Sharpe, Chelsey Dever, and my wife, Amy, too.

Earlier that day, the airship capturing aerial footage of the Cubs game so we couldn’t fly until it came back. Naturally I wanted that game to end fast. So the last thing I wanted was for the game to go into extra innings. And since the Cubs were down in the bottom of the 9th I was hoping for either a walk-off homerun or a Cardinals win – sickening, I know.  Alas, the Cardinals won in regulation and the DTV Blimp was on its way back t the airport. Before we could fly though, the crew had to unload all of the gear and the Cineflex HD camera that allows them broadcast the great aerial footage they shoot – so I arrived early to watch the team capture the airship and prepare it for our flight.

Once all the gear was out, we hopped in and prepared for take off. Our pilot, Bret (with one t) expertly lifted us off the ground and we took off into the sunset…sort of.  We headed East towards the city, but the view behind us was pretty spectacular. Though the sky was crystal clear, we had some great color as the sun approached the horizon. We did have to settle in for a pretty lengthy ride. Chicago is about 30 miles, as the crow flies, from DuPage Airport and with a top speed of about 40+ MPH in ideal conditions, it’s not a quick trip. Add in a slight headwind and that speed is slowed.  Though I’ve flown once before, I was once again incredibly surprised how smooth and comfortable blimp flight is – but I can’t say what it’s like in rough wind conditions.

The sun set relatively soon after we took off and the twilight hours were beautiful over the Western suburbs. To add a twist to this flight, I rented a 45mm tilt-shift lens to attempt the ‘miniature’ look from the sky. I had a few successful shots, but shooting from a moving platform, in low-light, with a manual focus lens was pretty challenging. I definitely want to give that lens another try next time I take to the skies – I already know what I’d do to improve the shots.

We continued to amble along and after an hour we reached the city limits. It was amazing to see the city lights from above. Quite a difference from experiencing sunset over the suburbs.  We couldn’t hang around the city for too long, but the few minutes we spent was pretty amazing. After a quick pivot, we had to head back to the airport. The ride back was nice and relaxing. As I remarked to Bret, ‘Wow, it’s dark. I bet landing is a challenge.’  He quipped, ‘I love flying at night. Just have to turn on your landing lights – and if you don’t like what you see, turn ’em off!”. Bret, you’re awesome!

Before I close, I can’t thank the entire DIRECTV Blimp crew (especially our pilot Bret and Van Wagner’s Director of Client Services, Gus) for making this flight possible. It took a lot of work to prep, launch, fly, and land us safely.  Please, please, PLEASE make sure to follow the DIRECTV Blimp on Twitter and Instagram. If you see them flying, and snap a shot of them, tag them and share it them. You never know what might happen – That’s how I became friends with the blimp! Here are more photos: 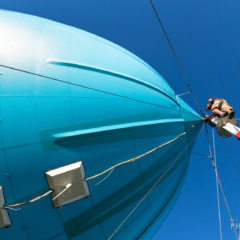 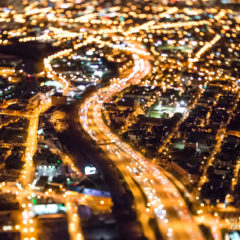 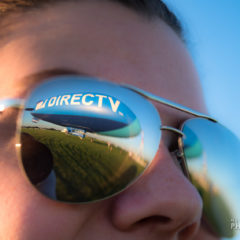 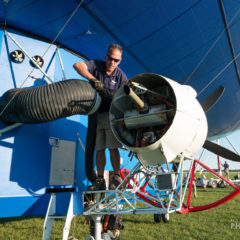 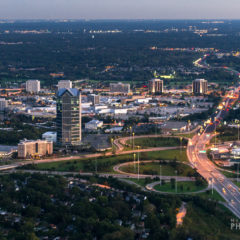 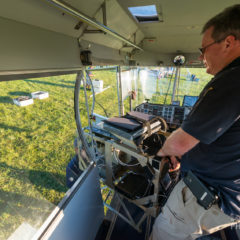 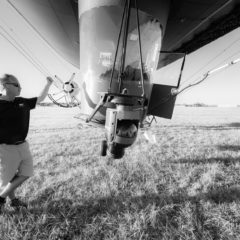 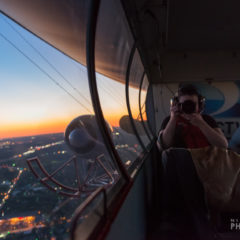 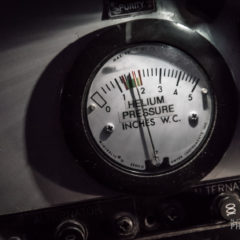 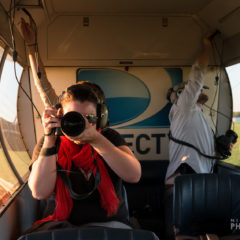 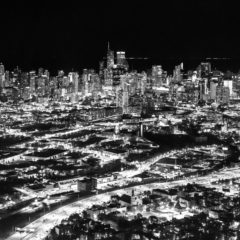 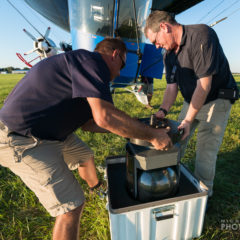 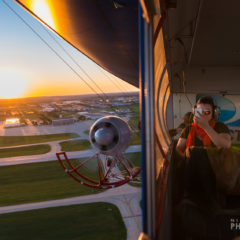 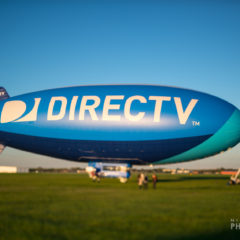 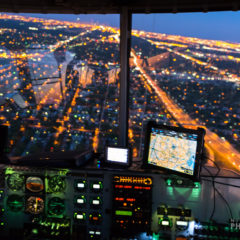 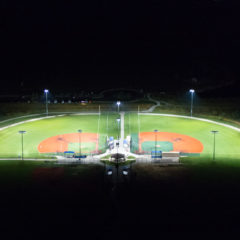 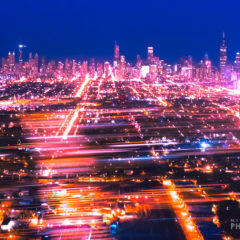 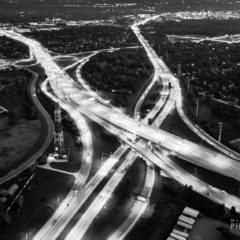