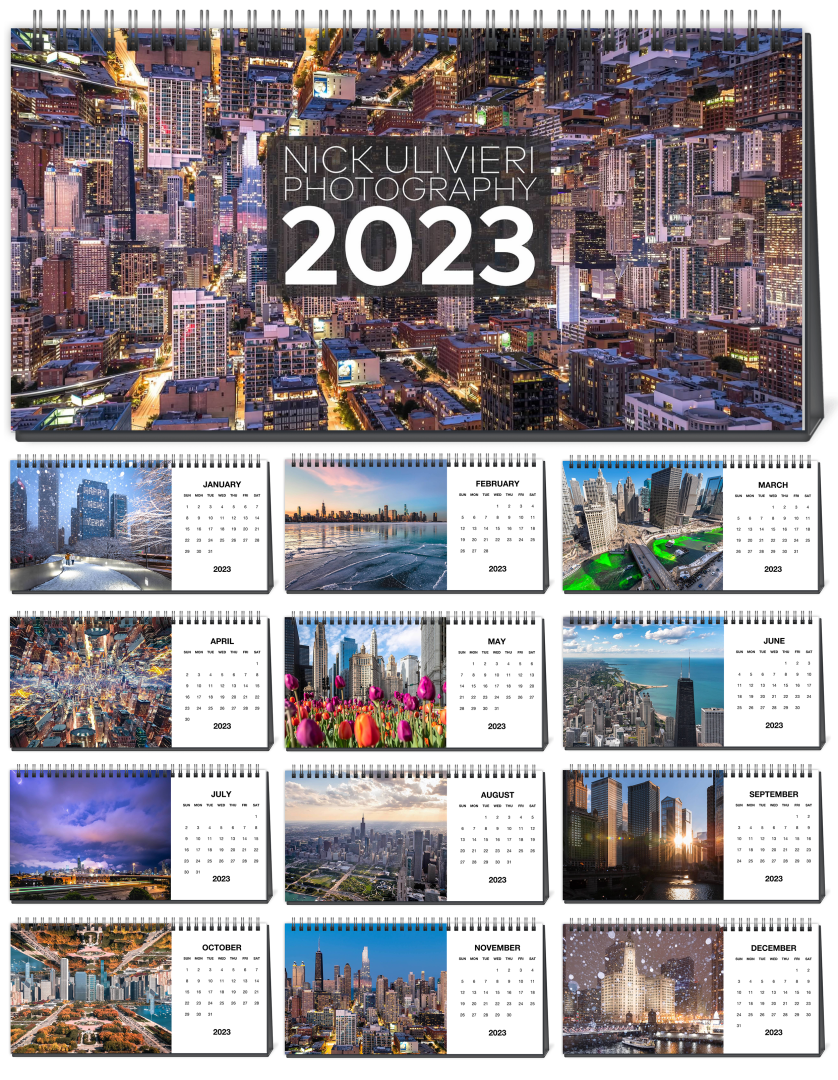 It’s that time of the year again! Here’s a rundown of all the photos in my 2023 desktop calendar. Order yours here!

JANUARY: 2022 started off with a gorgeous snow fall. I couldn’t resist bundling up and exploring Maggie Daley Park. It was a nice surprise to see BCBS lit up with a Happy New Year greeting. 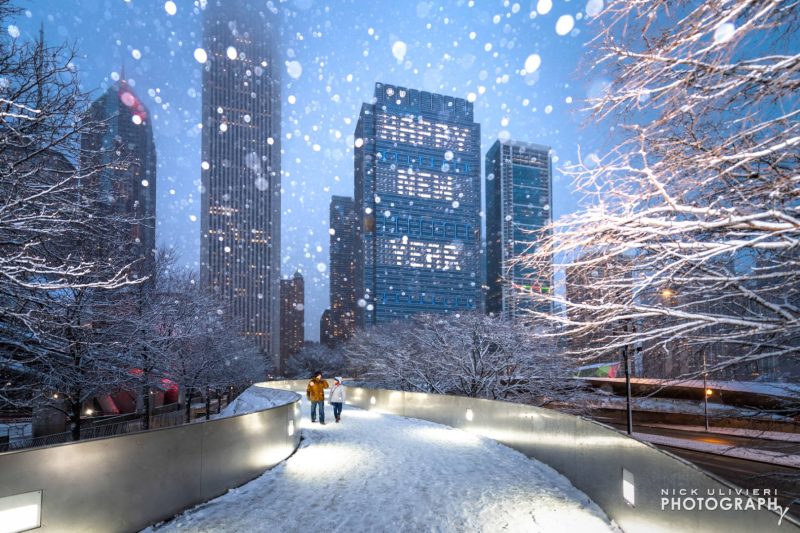 FEBRUARY: Most people think I’m crazy for loving winter as much as I do, but can you blame me? Once you learn to embrace the elements via proper layering, winter can be incredibly beautiful. This photo was taken in the depths of winter just as the lake began to freeze over. 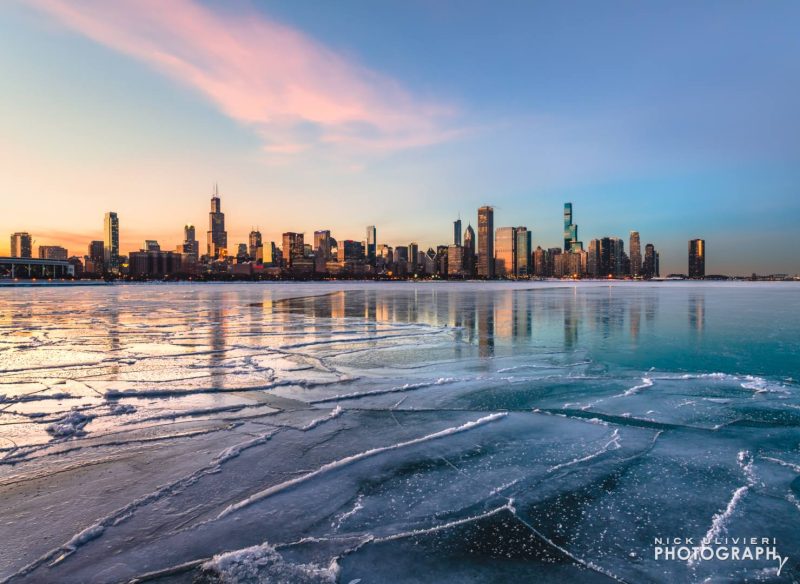 MARCH: I took a couple years off from watching the river dyeing on St. Patricks Day, but my friends at LondonHouse Chicago let me photograph the annual spectacle from their rooftop. What a view! 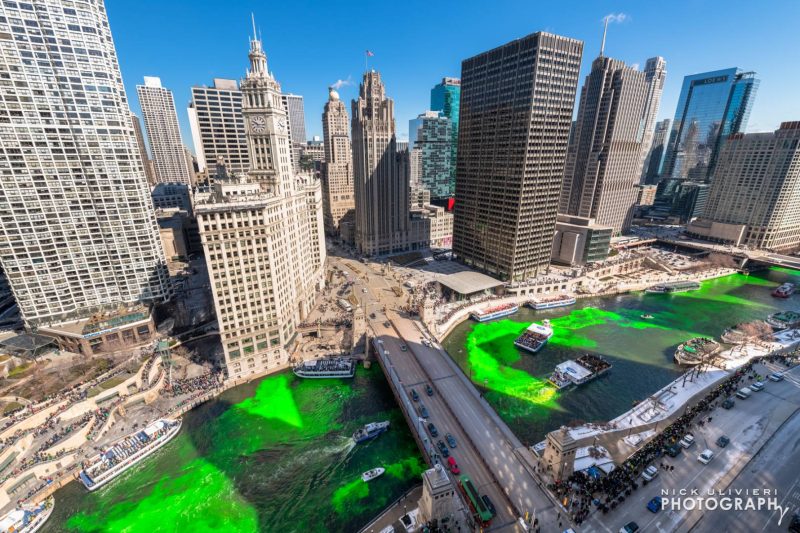 APRIL: This year I decided to include a few creative edits into the calendar. This image started as a rather normal night photo looking North from Skydeck. But I didn’t stop there. In Photoshop I copied the image, flipped it vertically and horizontally, then trimmed out the sky so the two images would layer over each other in a seamlessly staggered pattern. 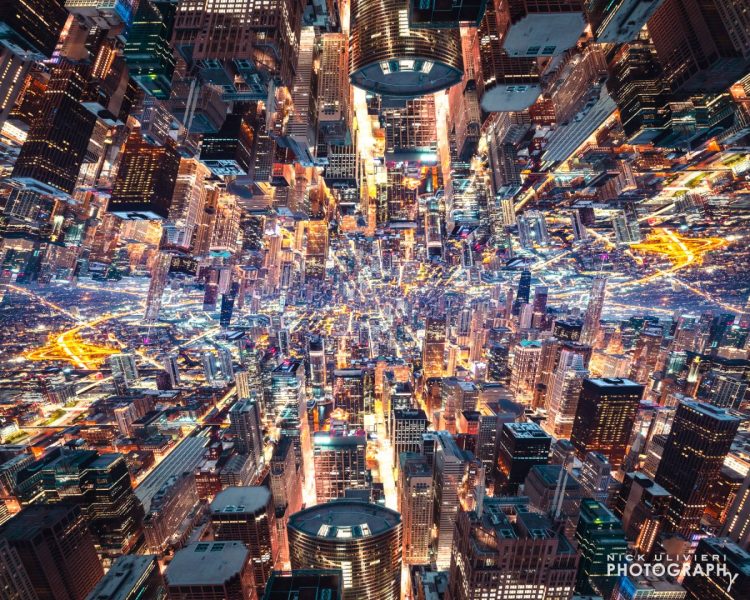 MAY: April showers brought May flowers in 2022! Here’s a look at the tulips in the median of Michigan Avenue backed by an iconic mix of Chicago’s architecture. 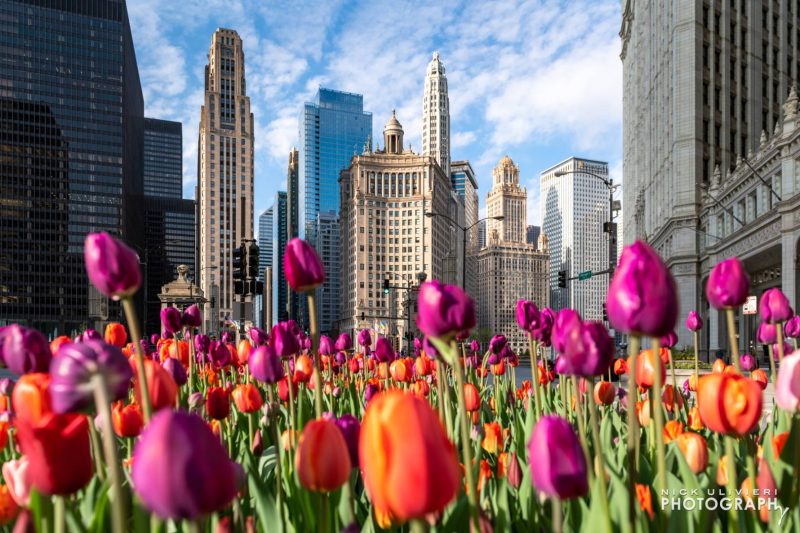 JUNE: It’s always fun to take to the skies and fly over the city with my friends from Breeze Helicopters. This photo, looking north, is a picture-perfect view of Chicago’s north side. 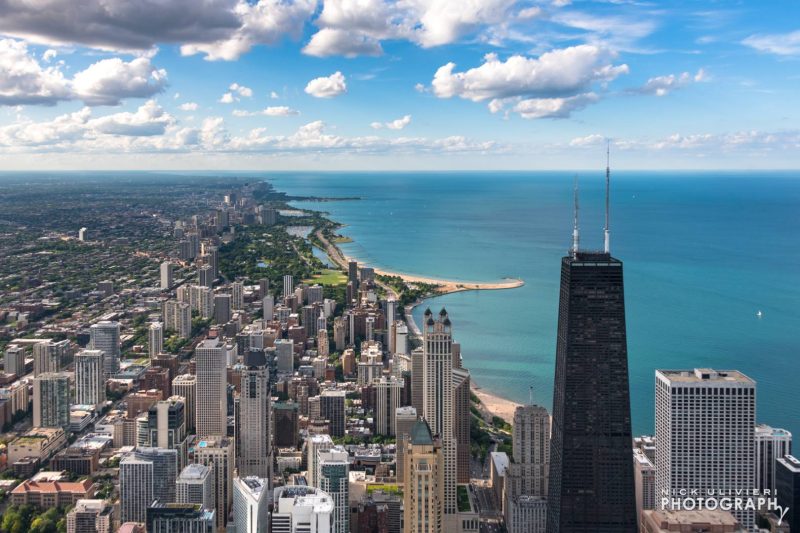 JULY: This is the view from our new home. In June of 2022 we moved about two blocks away. We still have the trains (streaking by) but we now have an amazing view of the skyline. I won’t have to go far to chase storms around the city. 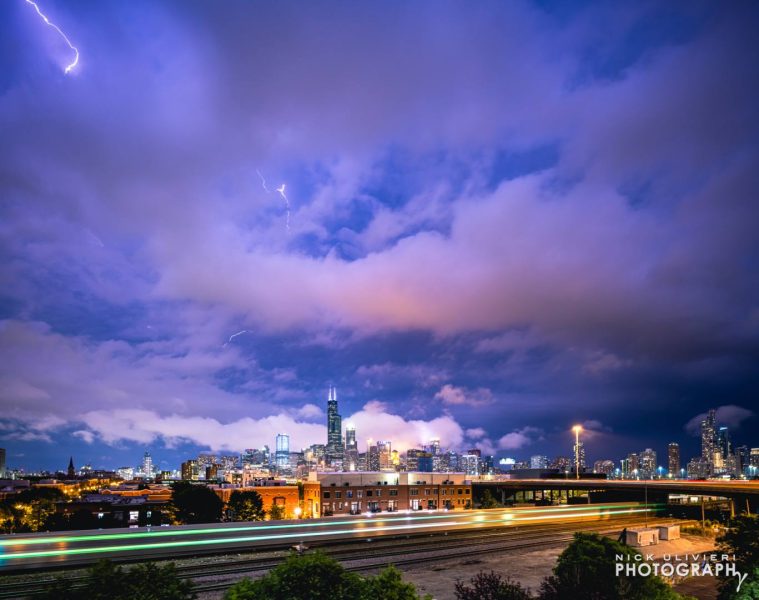 AUGUST:  This month features another aerial taken on a flight with Breeze Helicopters. Tough to beat a doors-off helicopter flight in the summer. Seeing Chicago from above is simply amazing. 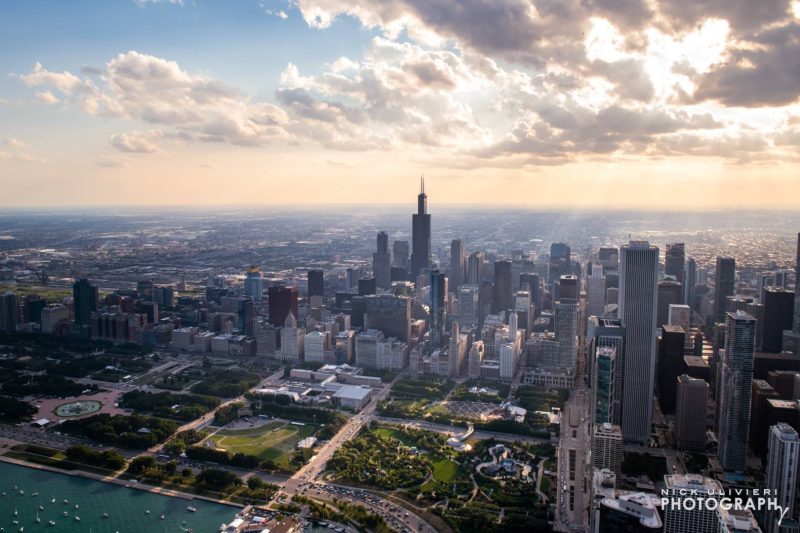 SEPTEMBER: This photo was taken from the Michigan Avenue bridge near sunset. Instead of photographing the sun directly, I caught it bouncing off of 77 W. Wacker and 111 W. Wacker. 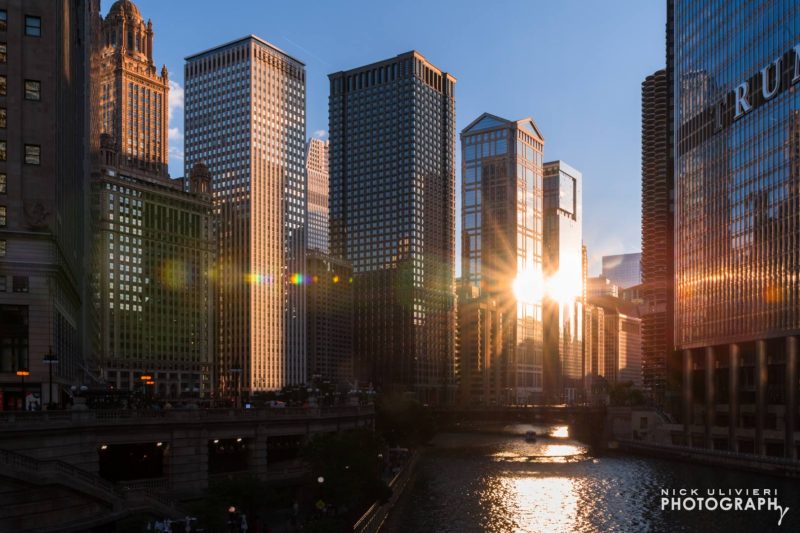 OCTOBER: This drone photo, taken over the southern end of Grant Park was shot in early October as the foliage began to turn. This composite was created using a similar technique to April’s image. In this case I removed the sky from the foreground image, duplicated and flipped it, then revealed some of skyline on the right-hand side to lock the two images together. 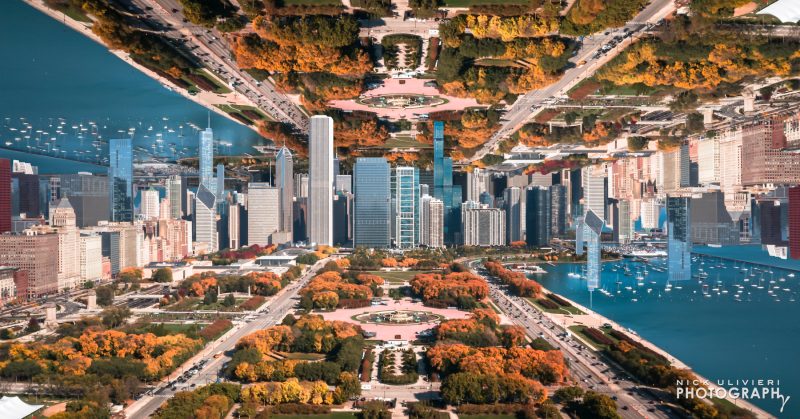 NOVEMBER: The days get markedly shorter, but the cool nights lead to crispy clear blue hours. Here’s a view of the River North and Gold Coast neighborhoods from atop The Montgomery. 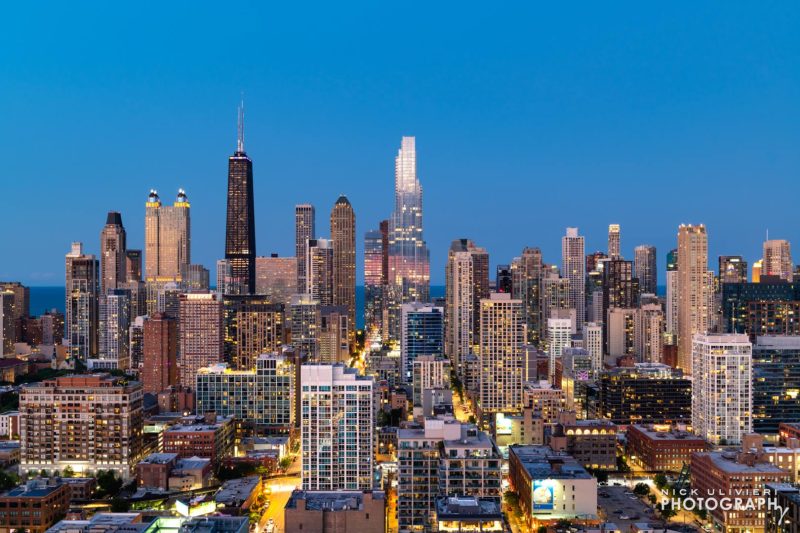 DECEMBER: Well, it’s winter again. Sure cold has its faults, but to me the cold beautiful. This photo depicts The Wrigley Building on a snowy night. I’m still not sure why a river cruise was running, though. 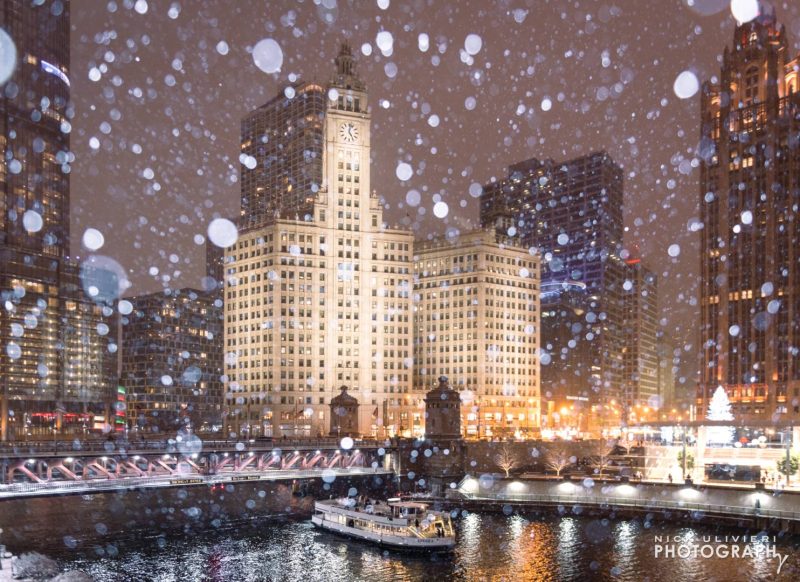